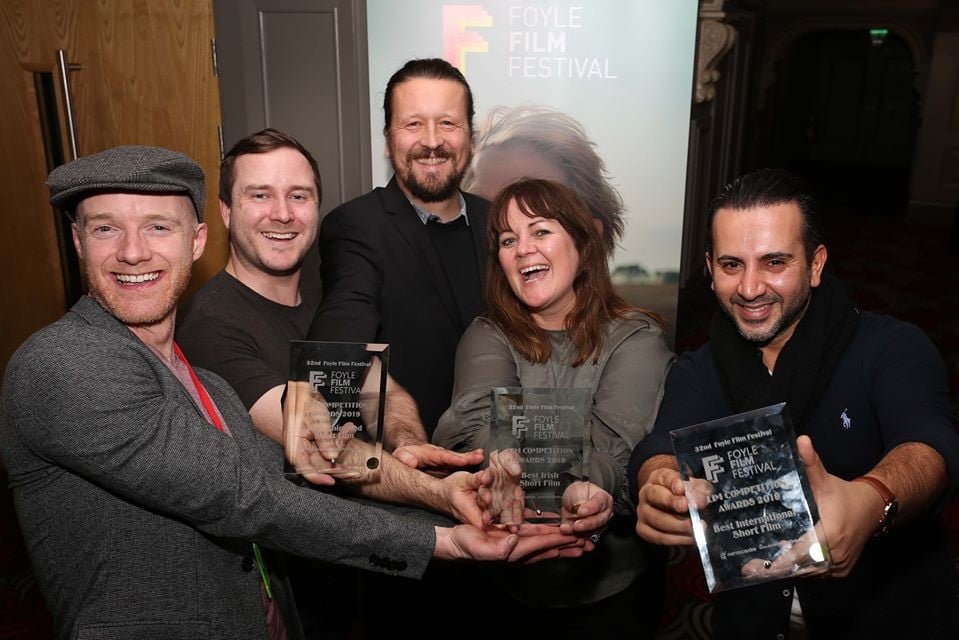 The 2022 Foyle Film Festival will take place from Friday 18th to Sunday 27th November in Derry-Londonderry.

Foyle Film Festival is one of only a handful of International festivals with Oscar® affiliation, BAFTA and BIFA recognition. The festival offers filmmakers, animators and artists a unique platform to screen their films, network with industry professionals and gain access to the international market.

The prestigious Light In Motion (LIM) competition, sponsored by City of Derry Crystal, will reopen to filmmakers and animators across the world on Friday 8th April 2022.

The three competition categories under Foyle Film Festival Light in Motion Awards 2022 are:

Recipients of the LIM Awards qualify for consideration in the Live Action and Animated Short Film categories of the Academy Awards® without needing the standard theatrical run. Foyle Film Festival is also an IMDb Qualifying Festival, granting all eligible film submissions a fast-tracked title page on IMDb.com.

Previous Foyle Film Festival winners and competitors who have proceeded to win the Oscar® include: Guy Nattiv and Jaime Ray Newman for Skin (2019), Chris Overton and Rachel Shenton for The Silent Child (2018), Terry George for The Shore (2012), Martin McDonagh for Six Shooter (2006), Andrea Arnold for Wasp (2004), Adam Elliot for Harvie Krumpet (2003), and Eric Armstrong for Chubbchubbs (2002).

Funded by the Department for Communities through Northern Ireland Screen and by Derry City and Strabane District Council; Foyle Film Festival delivers a comprehensive programme of documentaries, short films and feature films from all over the world; a full programme of educational events for schools, youth, and adults and a variety of industry networking events and panel discussions.

The Festival is the flagship project of the Nerve Centre, Northern Ireland’s leading creative media arts centre which delivers a diverse range of cutting edge projects, training and production opportunities, state of the art production facilities and creative learning centres in Belfast and Derry-Londonderry.

CONDITIONS OF ENTRY:
By submitting to Foyle Film Festival it is mutually understood that competitors have read and are bound to abide by the rules and regulations of the Festival and that they have pre-cleared all materials that comprise the film, as an authorised holder of the intellectual property of the work.
Films selected for screening during the Festival should be in digital format such as Pro Res or High Res MOV or AVI encoded MPEG-4 video or H.264/H.265; 4k/8k UHD.
For digital online screenings, the screening format eligible for inclusion is h264 1080p digital file.
Films should be presented in their original versions with English language subtitles or commentary where necessary.
PLEASE NOTE FOYLE FILM FESTIVAL DOES NOT PAY SCREENING FEES FOR SHORT FILMS IN COMPETITION.

SHORT FILM DEFINITION:
All films submitted for competition must be completed after 1 July 2021 and have a running time of 30 minutes or less including credits.
Foyle Film Festival welcomes all forms of short film and animation however music videos, documentary shorts and promotional films are not eligible for consideration.

PREMIERE STATUS:
Due to limited space available in all competition categories, the Festival will prioritise programming short films and animations that are Northern Ireland premieres where possible.
All Irish short films selected for competition will be at a minimum a city of Derry/Londonderry premiere.
Films that have previously been publicly screened, broadcast or otherwise made publicly available in full (including online) in UK & Ireland are not eligible for consideration.

MULTIPLE SUBMISSIONS:
Competitors should only enter their submission in one category. If you are a film collective or distributor entering more than one film please pay a separate fee for each film and list them in the appropriate category, providing a separate Online Screener for each film.
Group discounts may be applicable in some cases but please note that Foyle Film Festival DOES NOT PAY ANY SCREENING FEES FOR ANY SELECTED FILMS.
For further information on group submissions contact the Competition Manager directly.

FORM & CATEGORY DESIGNATION:
The Festival reserves the right to place films into alternative categories if it feels it is to the benefit of the filmmaker. This will be discussed with the filmmaker before any decision is made.

ONLINE EXHIBITION & PROMOTIONAL TRAILERS:
Foyle Film Festival does not accept films freely available to view in full online. If your film is available to view publicly in full online then it will be automatically withdrawn from the competition. Films that have previously been publicly screened, broadcast or otherwise made publicly available in full in UK & Ireland are also not eligible for consideration.
Excerpts of your film, in the form of a promotional trailer totalling no more than 10% of its running time are exempt from this rule. Competitors agree under the terms of submission that promotional trailers of their film may be used by the Festival as part of the festivals PR campaign on Foyle Film Festivals website and social media channels.

SUBTITLES:
Films should be presented in their original versions with English language subtitles or commentary where necessary. Exceptions can be made for films that contain little or no dialogue.

WAIVERS are not granted to submitters in any circumstances, as a policy. PLEASE DO NOT SEND UNSOLICITED EMAILS REQUESTING WAIVERS. ALL REQUESTS OF THIS NATURE ARE DECLINED.

ONLY SEND THE FINAL COMPLETED VERSION OF YOUR FILM. WE DO NOT ACCEPT RE-EDITS OR WORKS IN PROGRESS UNDER ANY CIRCUMSTANCES ESPECIALLY AFTER FILMS ARE SUBMITTED INTO COMPETITION.

All fees must be paid. FFF takes failure to pay the relevant and correct fee very seriously. An email from the CM will be sent to the entrant in this event. After a warning, failure to pay will result in disqualification.
WAIVERS are not granted to submitters in any circumstances, as a policy. PLEASE DO NOT SEND UNSOLICITED EMAILS REQUESTING WAIVERS. ALL REQUESTS OF THIS NATURE ARE DECLINED.
The exception to this policy is filmmakers who have been invited to screen at the Festival or who may have had previous work screened at the festival. In this instance an Alumni discount rate will be provided at the discretion of the Competition Manager and Festival Director.

For BAFTA consideration, British short films and animations which screen as part of the LIM Awards at Foyle film Festival are eligible for consideration in the Short Film Awards at BAFTA. For more information on BAFTA eligibility visit: www.bafta.org

International Short: Foyle Film Festival accepts live action short films under 30 minutes in duration which have been produced after 1 July 2021. In keeping with Academy rules, we do not accept documentary short subjects in this category.

Irish Short: Foyle Film Festival accepts live action short films less than 30 minutes in duration, which have been produced after 1 July 2021. In keeping with Academy rules, we do not accept documentary short subjects in this category.
An Irish short film should be creatively led and produced by teams from the Republic of Ireland or Northern Ireland and produced by an ROI/NI registered production company.

Short Animation: Foyle Film Festival accepts animated shorts for this category less than 30 minutes in duration, which have been produced after 1 July 2021. We do not accept factual shorts or music videos in this category. Animation must figure in no less than 75 % of the picture's running time.

PUBLICITY:
The Festival reserves the right to use extracts from submissions for TV, online and radio coverage or any other publicity that is used in the promotion of the Festival. Competitors agree on submission that promotional trailers of their film may be used by the Festival as part of the festivals PR campaign on Foyle Film Festivals website and social media channels. Please ensure that uploaded stills and headshots are of print quality and that you have permission to allow the Festival to use these for promotional and press purposes in perpetuity.

EXHIBITION FORMAT:
Films selected for screening during the Festival should be in digital format such as Pro Res or High Res MOV or AVI encoded MPEG-4 video or H.264/H.265; 4k/8k UHD. Please note Foyle Film Festival currently does not accept DCPs.
Audio should ideally be 5.1 channels for exhibition and the minimum for a non-mono configuration of the audio shall be three channels left, centre, right ideally.

ONLINE EXHIBITION PLATFORM:
Foyle Film Festival will also exhibit competition films securely via the Festival Eventive platform. Please note screenings will be Geo-Blocked to the UK and Republic of Ireland for the duration of the Festival dates 18th - 27th November 2022.

PLEASE NOTE: IF YOUR FILM WINS AT FOYLE FILM FESTIVAL AND SUBSEQUENTLY QUALIFIES FOR ACADEMY AWARD NOMINATION, IT MUST BE AVAILABLE ON 35MM or 70MM FILM OR IN A DCP FORMAT ACCORDING TO THE DIGITAL QUALIFICATION STANDARDS IN PARAGRAPH III.A.1 IN THE RULES & ELIGIBILITY TERMS OF THE ACADEMY SHORT FILM AWARDS AND THE BAFTA SHORT FILM & ANIMATION AWARDS. THE PRINT OR DCP OF THR SHORT FILM SUBMITTED MUST BE IDENTICAL IN CONTENT AND LENGTH TO THE QUALIFYING FORMAT.

FESTIVAL SELECTION PROCESS:
Successful Submitters will be notified of the final selection for festival inclusion by Friday 7th October 2022.

Special juries nominated by the Festival management select the films for the Festival programme. The Festival management may invite films for the competition and main festival programme. Films go through several rounds of screening and selection by panel. Please do not assume that provisional shortlisting guarantees you a place on the final shortlist. All successful applicants will be notified via FilmFreeway on Friday 1st October 2021. The selection committee's decision is final.
Due to the large number of submissions received, the Festival cannot offer feedback regarding films that are not selected for the programme. Many other factors determine competition programming at Foyle Film Festival. Please don’t be discouraged if your film is not accepted.

Unfortunately, contacts can be mislaid occasionally, so please assume if you have not heard from us via FilmFreeway by the specified notification deadline of Friday 7th October 2022 that you have been unsuccessful at this time.

All qualifying films will be announced on the Foyle Film Festival website in late October when the full Festival programme is launched.

The category winners will be announced at the closing evening LIM Awards Ceremony, Sunday 27th November 2022. Absent winning filmmakers will be contacted by telephone or email.

Winners in all categories will receive a Light In Motion (LIIM) Award Plaque and certificate. If you cannot be present at the ceremony, your LIM Award will be mailed to you.