Vittorio suddenly leaves college and gets back to his family in the countryside. Something convinced him that the dark secret he shares with his parents will stop him from fulfilling his aspirations.

Martin Basile (born March 21 1992) is an Italian film director, screenwriter, songwriter. His films mainly focus on themes related to ontology and the concept of reality, using the medium as a metaphor for experiencing life.

As a songwriter he wrote many albums. He is one of the 7 finalist of the prestigious Premio Bindi in 2020. He also won the Emanuela Pedulà Prize in 2016, the Toscana Selection Prize in 2015 and the Sotto Toni Prize in 2014.

"Zeno's Paradox" was mainly inspired by the lead actor's own experience. When he asked me to write a short film for him to play, we talked about his aspirations and concerns. He's been trying to launch his career as an actor for a while, but everybody always advised against it and suggested instead to work in his family's farm in the countryside.

I actually feel the same kind of concern. Since I come from a region without any relevant film company or production and know very few people from the industry, I'm sometimes afraid of not getting any opportunity to make a living from my work as a director and, eventually, be forced to do something else to survive.

I know many people who feel the same way, people who know what their true calling is, but don't know how to make it reality. I truly believe that the only way to succeed is by persisting. This is why I decided to write this short film.

The title refers to Zeno's most famous paradox, about Achilles and the tortoise. Since the protagonist is a philosophy student, he ponders about his concerns throughout the film, referring to famous philosophical quotes. Zeno's paradox proves that movement is only an illusion. Everything stays still, so change is not possible. Will Vittorio be able to change his own life? 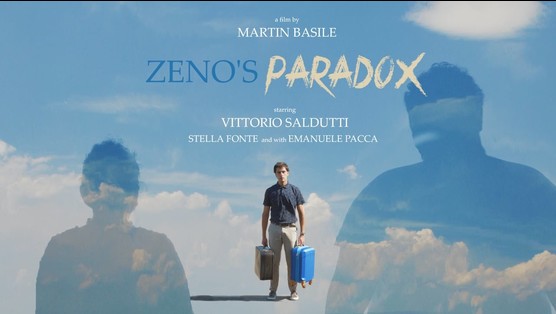