Guard Boss and Stupid Guard make every effort to keep the valuable red shoes safe. A small, innocent ball causes them to become preoccupied, and the Thief in Socks steals their shoes as a result. Although the guards make an effort to apprehend him, the thief escapes. The thief stands at the door wondering whether to keep running away or return back to get the missing red shoe. Suddenly he gets surprised by the innocent small ball and the Guardian Boss at the same time.

Benjamín Haverla is a filmmaker based in Martin, Slovakia. He studied at Private Secondary Technical School in Poprad, Slovakia. He's now a student at the University of Creative Communication in Prague, Czech Republic. He started to make films when he was 12 years old. Later he gained success in film competitions for youth and children in Slovakia. As an actor, he collaborated on advertising for an ISIC company in Slovakia. In 2020 he first-time sent a short film abroad where he became a finalist. In 2021 he won some awards with his next short film "The Last Letter". After his film, he decided to achieve new experiences about the film process as a background actor in the feature film "The Performance". At university, he is specialized in animation and VFX. His main career goal is to direct feature films and bring new stories to the screen.

The university gave us a homework to make a short film using only our legs. Working with this crew was fun because everyone on the team took their work seriously, we avoided unnecessary issues and could enjoy the creative process. This made working with this crew enjoyable. Some of the challenges making this film included — Fast filming due to the one-day production schedule was one of the hurdles in making this movie. Because this short film just has leg characters and no speech, the next challenge was visual comprehension. As a result of my desire to use camera movement rather of a cut, the initial scene with the small ball was equally challenging. The viewer will be more intrigued and tense, in my opinion, when they are monitoring a small ball with a camera. So, our challenge was to repeatedly play this scene until the tiny ball appropriately stopped correctly next to the leg of the Stupid Guard character. While watching this film, I wanted the viewer to experience fun and indulge in his own fantasies while seeing this movie. This film is built on absurdity and it's on viewers how they will perceive legs characters. The film turned out to be a little different than the script because certain members of my crew's class had good suggestions while we were filming. The experience working on this film will help me with future projects because I tested my ability to collaborate with new people and also put my vision there. Because there was not only my vision, but also the vision of my film crew, I can tell it was successful. 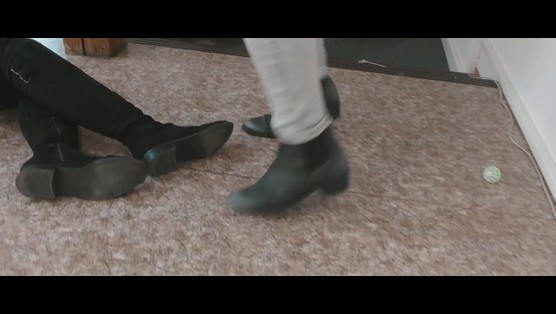