the gleaners, and: ritual for signaled bodies

“the gleaners, and: ritual for signaled bodies" performs at the edges between body and the external, oscillating and eroding those boundaries. A ritual for creating new worlds and situations for fragmented bodies, signals pass through the joints of animated and genderless bodies and body parts entangling the body-signal-actions both materially and conceptually as these control mechanisms interfere with pre-animated content. Perpetually shifting surfaces and skins serve as sites of projection and interference, contributing to the further "queering" of the state of these bodies and fragments that are stretched and submerged into and outside of the environment they inhabit, as they encounter desire, distress, and ritualized oscillations. Signals that generate sounds and compel movement, the making of the images, and the body, further challenges the stability and integrity of the space in its otherworldliness and the spatial relationships it establishes with the audience. At the edge between crisis and satisfaction, the work adopts the role of Millet's own "gleaners," making-do on the boundary between sustenance and the devoid.

BENJAMIN ROSENTHAL:
Benjamin Rosenthal (b.1984, New York, NY, Lives and Works in Kansas City, Missouri) holds an MFA in Art Studio from the University of California, Davis and a BFA in Art (Electronic Time-Based Media) from Carnegie Mellon University. His work has been exhibited internationally in such venues/festivals as the Stuttgarter Filmwinter (Stuttgart, Germany), High Concept Labs at Mana Contemporary (Chicago, IL), ESPACIO ENTER: Festival International Creatividad, Innovacíon y Cultural Digital (Tenerife, Canary Islands, Spain), FILE Electronic Language International Festival (São Paulo, Brazil), Vanity Projects (New York, NY), Locomoción Festival de Animacion (Mexico City, Mexico), the LINOLEUM Festival of Contemporary Animation and Media Art (Kyiv, Ukraine), and SIGGRAPH Asia (Bangkok, Thailand), among others. He has been in residence at the Fjúk Arts Centre (Husavík, Iceland), Signal Culture (Owego, New York) and the Ox-Bow School of Art (Saugatuck, Michigan), the Charlotte Street Foundation (Kansas City, Missouri), and is currently in residence at The Studios Inc (Kansas City, Missouri). His work across media explores what he theorizes as queer “technosexuality” and challenges the supremacy of physical contact in a technocultural age. Rosenthal is Associate Professor of Expanded Media in the Department of Visual Art at the University of Kansas, where he has been since 2012, and teaches video art, performance art, experimental animation, a variety of special topics seminars and interdisciplinary practices.

ERIC SOUTHER:
Eric Souther is a new media artist who draws from a multiplicity of disciplines, including anthropology, linguistics, ritual, critical theory, and New Materialism. He develops video instruments that investigate technological & cultural ecologies, agency, and emergence. He looks for new ways of seeing beyond the seductive qualities of an image, and to find unseen connections that help us understand our digital and non-digital existence. His work takes many pathways, which include single-channel video, interactive installation, projection mapping, print, virtual reality, and audiovisual performance.

In 2016, Eric won the Juried Award for Time-Based at the international art competition ArtPrize. He received his B.F.A. in New Media from the Kansas City Art Institute in 2009 and his M.F.A. in Electronic Integrated Arts from the New York State School of Ceramics at Alfred University in 2011. He currently is an Assistant Professor of Video Art in the Division of Expanded Media at NYSCC at Alfred University.

This is an experimental animation that is made in part with live techniques where 3D animations are "performed" in synchronization with sound to produce images that are recorded, layered, re-performed, and re-recorded. The process in which we make this is an innovative process that pushes the boundaries of what is possible via real-time rendering.

It is important for us to clarify as filmmakers that we feel strongly that this film comes from a queer point of view and a queer perspective. Rosenthal (as a member of the LGBTQ community) and Souther as a strong ally, are interested in disrupting hegemonic structures around what constitutes gay and queer aesthetics, which often privilege cis-white, gay male sexual desire as opposed to more diverse and divergent points of departure. The bodies in our work are both fundamentally queer in their presentation and in their actions, but the work also subjects viewers to an experience of queer "fragmentation." Rosenthal describes this "fragmentation" as related to a kind of slippage, rather than traditional compartmentalization, where identity and body construction become unstable. By subjecting the viewer to sensorially intense fragmentation, we destabilize normative viewing experiences and "queer" the space of the audience. 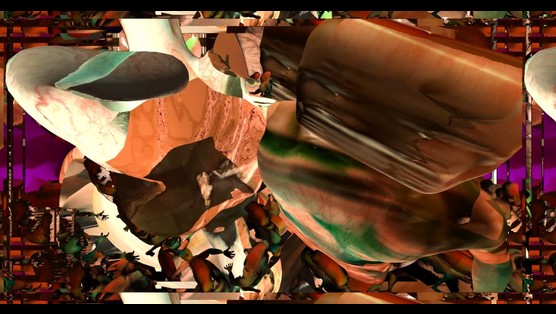