After winning “El Bombo,” the Cuban-US immigration lottery, Estrella and her grandfather, an impoverished Cuban family, prepare for a journey of a lifetime. One step at a time.

Wesley "Wes" Rodriguez is a writer, director, and cinematographer with experience in narrative feature films, commercials, and short films.

He is a first-generation Cuban-Guatemalan American born in Hialeah, Florida. With a focus in telling visually captivating stories through an authentic Latinx lens, he aims to change the face of Hollywood's diversity problems.

Disconnected, his most recent short film about the psychological devastation of Hurricane Maria premiered at the 2018 HBO Presents New York Latino Film Festival in Manhattan. Wes was also awarded an opportunity of a lifetime to work closely with acclaimed director Werner Herzog in Cuba in 2017. During Wes' short stay in Cuba, he co-wrote, directed and shot Palante, a short film about an impoverished Cuban family immigrating to the United States during the economic crisis of the 90s. Palante has garnered multiple accolades from film festivals across the US and abroad, as well as media attention from former Univision reporter Maria Elena Salinas.

Wes' other bodies of work include cinematography for more than 30 short films, two independent documentaries in Thailand and Japan and two feature films. No Todo Es Trabajo, an Ecuadorian feature film he shot in 2017, was the most watched domestic film in the country for 2018 during its 5-week theatrical release.

Currently, Wes works part-time as a mentor for the Latino Film Institute's Youth Cinema Project under the guidance of its founder, Edward James Olmos.

Wes enjoys shooting 35mm film, hiking and spending quality time with his friends and family. He can be regularly seen sipping on a cup of Cuban coffee and eating guava + cheese pastelitos.

'Palante' came to fruition as part of a 10-day master class and workshop in Cuba with acclaimed director Werner Herzog as our teacher, or as he liked to be called: "Mi Coronel."

As one of his soldiers of cinema and the only filmmaker of Cuban-American descent, I saw this as a chance to return to my father’s homeland—the one he had forsaken since the mid-1950s because of political reasons—to tell an authentic story from my culture. Sixty years later, I saw Cuba through my own eyes and not as a tourist, but as a filmmaker, and that’s why it meant so much to me. With an immense amount of pressure to share a story worth telling, while at the same time making my family and fellow Cubans proud, I dedicated myself to making my short-film ‘Palante’ a success.

‘Palante’ was born out of a similar sacrifice I had endure by moving to Los Angeles to pursue my dreams and the aspirations of a better life. The film’s title and theme was inspired by my Cuban grandmother, Aleida, who would always console me with the words of “¡Pa’lante, Pa’lante!” which means keep moving forward.

Shot in the colorful town of San Antonio de los Baños, I let the environment tell the story. As we follow Estrella and her grandfather, we get a glimpse of the impoverished lifestyle many Cubans have had to endure in their day to day life for decades; lack of resources, broken, tarnished buildings and walls etc. Captured mostly through wide angle and handheld camera, I focused on highlighting the beauty and resilience of Cuban culture in contrast to that of their surroundings in each frame.

‘Palante’ has premiered and garnered multiple accolades from film festivals across the US and Europe, as well as media attention from former Univision reporter Maria Elena Salinas. 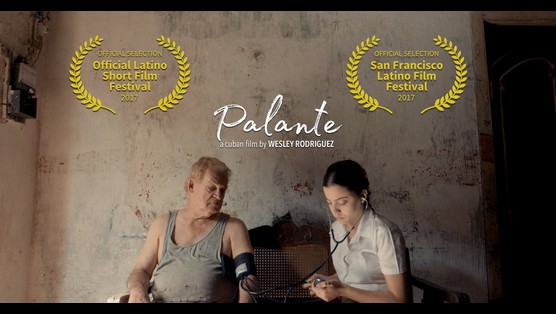