Laura, or Scenes from a Common World

"Laura, or Scenes from a Common World" is a cinematic poem. It combines visceral physicality, lyrical poetry, and evocative cinematography to tell the story of one woman’s struggle to overcome her wounded past and her steps toward empathy. In this spare drama, inspired by Ovid’s Apollo and Daphne myth, Laura struggles to root herself in a foreign land and to embrace the quiet consequence of the common world around her.

Charles M Pepiton works as Producing Artistic Director for Square Top Theatre (STT) and Associate Professor of Theatre at Gonzaga University. His other films include STT's Climbing Eros and Koppmoll. Read more about his work at www.cpepiton.com.

"Laura, or Scenes from a Common World" was created collaboratively in Tromsø, Norway, in June 2015 by an international team of artists. The process was a conversation between the landscape of the Barents Region of Northern Norway and our various artistic disciplines.

The region’s shifting light and steadfast mountain-scape offer a counterpoint for Laura’s struggle to emerge after her experience of loss. This is a landscape that welcomes Laura’s isolation, but also teaches her to embrace the quiet consequence of the common world around her. Laura is a foreigner to Norway's birch forests and fjords. She is equally at odds with what she finds among Tromsø’s public spaces and docks. Her clothing is wrong for the climate. Her features are far too Mediterranean. Through the course of the film, viewers mark her journey from separation toward empathy, from transience toward a life more rooted in place and other people.

While remaining grounded in the narrative of Laura’s struggle, the film unfolds as a cinematic poem with colliding images, words, and evocative physicality. This is a film that invites audiences to complete the creative act. Poet Anne Micheals notes, "not two to make one, but two to make the third, just as a conversation can become the third side of the page." We invite audiences to share in this conversation. We hope viewers will pause to contemplate as Laura stops to connect with the Northern landscape and the common world around her.

Naturally stories of love and loss are old, maybe the oldest the stories we have, and after I started writing "Laura", I remembered reading in college “Apollo and Daphne,” as recorded by the Roman poet Ovid in "Metamorphoses". It is a book filled with stories of change, many of them involving love. Ovid’s stories are never static. A single encounter is full of passion, images, consequences, echoes of other myths and characters, allusions and whispers for us to hear and imagine. I read again of Apollo being overwhelmed by love, released as it was from Eros’s golden tipped arrow and of Daphne’s inevitable flight after being struck by a second arrow, only this one was dull and lead tipped. Similar to Daphne, Laura flees as a consequence of love. We learn this in the beginning of the poem when she recalls her boy on a bridge and how after he is gone there is suddenly “nothing.” Yet Laura is not a replication of Daphne. Her return home begins not with a plea but after an unexpected practice of attentiveness. We notice when she remembers peeling apples or looks outside of a window or recalls a young girl who could not sleep because of a cuckoo bird. There are no demands made by these moments or the people in them. Rather, Laura must receive the inherent gift within them. For her to do this, she must make an admission of the gift’s reality, and I believe stopping is such an admission. 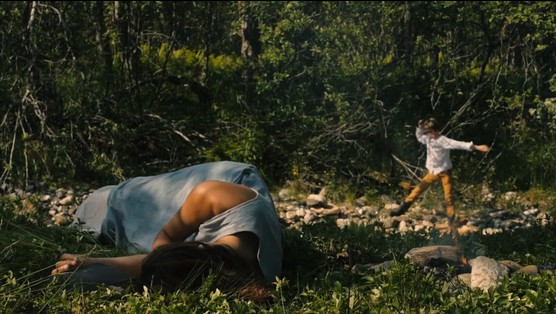