On a concert stage you always can join great sounds and incredible musicians. But sometimes the sounds next to the stage are turning into the focus of attention. The cellist tries to start with his performance, but there're a number of surprises.

Laudatio Gib' mir Fünf, International Kids Filmfestival, Hamburg, Germany 2019:
"The first prize of this year's High-Five Competition goes to "fortissimo" by Lilith Jörg. This film convinced us, because he met the topic of the competition exactly! We have heard many different sounds and sounds that were sometimes beautiful and sometimes disturbing. The young filmmaker has always had new and outstanding ideas to disturb the cellist in his performance. The StopMotion is well done, you can even see the finger movements - and finally there is a smooth end with beautiful music."

Laudatio Goldene Gans Filmfest, Karlsruhe, Germany, 2019 (2.place):
"A charming little animated film that shows the passion of the young director and creator. This film has scored an excellent storytelling. Own experiences are included in a very funny way. The realization is really stunning. It's well done from the idea to the final cut. Lilith put her heart and soul into every detail that can be seen in the presentation, the protagonist and the backdrop. Best wishes to this talented young lady for future film projects. We are looking forward what to see next!"

Laudatio "Best Film" (age 12 to 17) at Girls Go Movie Filmfestival Mannheim, Germany:
"A card box, a piece of fabric, a homemade doll, a cello from a
gift shop, a toy robot, some light, sound, music, a camera, a big talent behind it and tons of patience. These are the ingredients creating the outstanding StopMotion animation film "Fortissimo".
A work that unanimously convinced the jury with its quality. The short story is about a charming cellist defying his stage fright, cope with an annoying fly and a cheeky little robot. Dramaturgically and technically perfectly implemented and increasing to a strong conclusion and real fortissimo when the musician finally is able to perform his piece and the audience can applaud.
We say: Bravissimo, Lilith Jörg!
As we found out after the jury's decision, she is only 12 years old and has already a small award-winning filmography. We are excited to see which films will be seen by this promising young film artist in the next few years."
(Dr. Morticia Zschiesche, film scientist and author, November 2019)

The 13 year old director Lilith was born in Black Forest (Germany). She lived for two years in the US.
She started making animation movies at Elementary School (after school program) in 2015.
Since that time she discovered her love to create short films and experimental photography and express herself via that medium. With "In the Depth" and "colorscapes" she has been awarded at a couple of international festivals in her age's category.

"Making films is such a wonderful world. It's so deep. I want to learn so many things about it. It's my voice and expression to communicate some of my ideas." 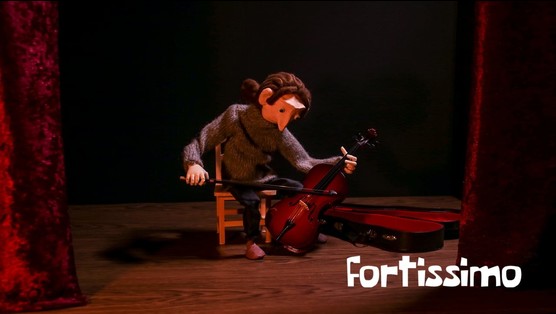