A teenage ninja girl must train with her Sensei Grandma, but her sense of style clashes with Grandma’s traditions. Today’s lesson is #23 lizard-style climbing: scaling a brick wall with speed, ease and fun. In the end, they both learn something new from one another and bond even closer.

Ren is an accomplished professional actress and writer who brings her ‘Aloha Spirit’ to everything she does. Her passion for storytelling and creating the world of Ninja Mom and Ninja Girl, aka, “KIMI HANNA: Fashionista Ninja” was inspired by her Japanese/Hawaiian roots and a desire to see strong female action heroes with great clothes! Ren’s screenplay Ninja Mom was accepted into the 2013 Hawaii International Film Festival Writers’ Accelerator Lab and honored as a semi-finalist in the 2015 UCLA Extension Feature Film Writing Competition, Semi-Finalist in We Screenplay Diverse Voices Screenwriting Competition and Quarter-Finalist in the Screencraft Family Screenplay Contest. Her trailer for “KIMI HANNA: Fashionista Ninja” was a finalist in the Women In Film Mini-Upfronts Competition. Ren has a B.A. in Theatre from UCLA and recently completed the Certificate Program in Feature Film Writing.

I was date-raped in college, one of the 11.2% of female undergrads to suffer assault.* I couldn’t talk about it—to anyone, either at UCLA, or at home. My self-esteem disappeared like a dead star in what had once been a universe of bright possibilities. But, eventually, two interests enabled me to cope: martial arts, and... comedy. I found strength in tales of female ninja warriors; and sanity through laughing at “Saturday Night Live.” When I was finally able to talk about what happened to me, I knew I had to use these interests to help others. And what came to me was an idea about a young female ninja who battles mean girls and monsters. Girls look up to her because she is pretty, and strong enough to stand up not just for herself, but for all girls. The reason Kimi wants to be a fashion designer is because of the power of fashion: when a girl puts on just the right outfit for her, she feels good; mean comments about her looks or appearance are toxic. Kimi is a champion for self-esteem. 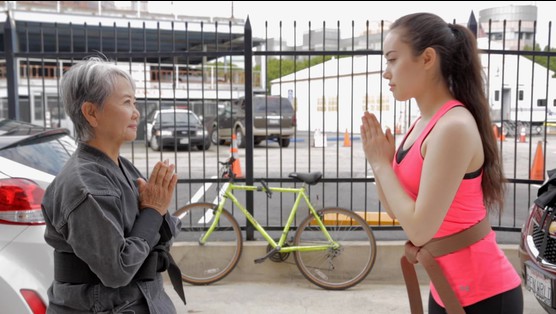