A bewildered elderly man desperately searches the dark corners of his mind to understand the meaning behind the appearance of a mysterious envelope. Yet he has forgotten it was he who wrote it.

Jonny has worked exclusively on directing fictional work since 2012 with his debut short film 'Halves' (2012). Since then he has gone on to self-fund and produce further films, namely 'To Meet a Sun Died Amber' (2014) and two music videos for Bristol based musician Chris Garcia. He is currently directing and editing further films for Chris’ debut album in 2019.

He is set to direct two short films in 2019 – 'The Smalls' and 'Thousand Lives' – whilst also working towards funding for larger short project 'The Glasshouse' which was recently long-listed as part of 2018’s Enter the Pitch. Alongside his directorial work he is consulting on the development of a feature film script and working as 1st AD. In the summer he 1st AD’d Hannah Hill's 'Lasagne' (2019), an ambitious five day production with actors Matthew Kelly and Felicity Montagu and over thirty crew.

Alongside his work in the film industry Jonny also writes on mountain history, culture, and environment, and how it is changing in a modern age.

What became increasingly apparent during scriptwriting was that depicting a mind on film gave potentially limitless opportunities to experiment with. The script up until its third draft was originally a word document and scene locations little more than ‘inifinite white space’. I had a clear sense in my head that I wanted the film to be a visceral experience that made the viewer feel the emotional impact, yet approaching such an internal environment was proving difficult.

Working with David K Whiting, Joe Newton and Caroline Jay we quickly agreed that they were all in effect playing parts of a whole and portraying fragments of memory. In my mind if each actor was playing incomplete elements then I wanted to blur the lines between where one started and another finished. Thus discussions during character development largely revolved around creating a cohesive backstory that unified each of them and provided them with some motivation. What became clear was that Third Quarter demanded increasingly unorthodox methods of development for both myself as a director but particularly for the cast; David hit on what has yet to be confirmed as either a stroke of genius or lunacy – writing down his character’s entire backstory before tearing up the piece of paper and throwing it all away.

The set was undoubtedly the fourth character during production, it changed, morphed and often seemed to reflect the mood of the cast and crew. Jorge Luis Borges famously envisaged an infinite library whose identical hexagonal shelves extended to infinity. There’s something in the way Borges described his environment that captured a real sense of darkness and the uncanny, whilst equally conveying the notion of individuals caught in an endless search – Erik Desmazieres drawings of the Library were a perfect visual reference. Our own ode to this idea imagined a central hexagon that housed the desk and most of the film’s action. On three sides were wooden shelves of books and on the alternating three short aisles sections which branch off. It was clear from early conversations with the cast that the central hexagon was a place of certainty and security for the character whilst the extending aisles were darker, places not visited as often and under no real control.

This tension in the set became an increasingly key fundamental that worked to inspire our visual style. The fluctuation between the known and unknown, and indeed the unanticipated jumps between them were at the very heart of what was emotionally so difficult for the lead character. I was keen to keep the viewer on their toes, uncertain as to what might be around the corner and which fragments were significant or not. With little point of reference the isolation and desperation becomes painfully apparent in the face of the inevitably shifting environment.

Working with Dan Baboulene, the classically inspired score became restlessness and unsettled. Conversations moved away from my early ideas of jazz and Miles Davis and instead towards the likes of Philip Glass and Bernard Herrmann. Whilst the sound design from Claire Stevens and James Chatwin played on those ideas of distance, memories far gone and a maelstrom of potential stimulants which developed the alienation that both the set and David had already introduced during Principle Photography.

It finally goes without saying that amidst such strangeness, the continued support and professionalism of the entire team kept me from slipping into the void. Samuel Jay Chessell in particular has been a rock of common sense, the hexagon from which I frequently orientated from. More broadly the enthusiasm and talent from all involved – in what, it should be noted, was an unpaid venture – has not only produced what is hopefully an insightful emotional interpretation, but has equally made the process of its creation a complete joy. I cannot thank them all enough. 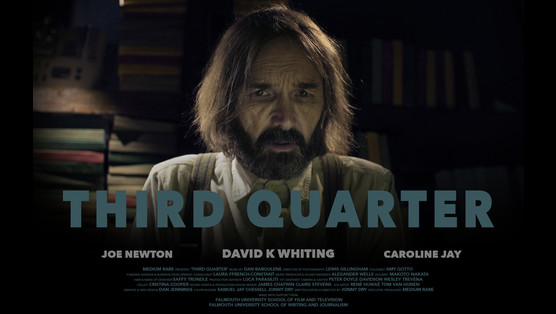