The Thing About Beecher's Gate

Deputy Eli Stoker (Morgan McLeod) knew was he was getting into. Everyone told him the same thing. Watch out for the boys from Beecher’s Gate. But he still filed for a transfer as soon as he saw an opening. And there always seemed to be an opening in Beecher’s Gate. It didn’t much surprise Stoker when the Sheriff (Chris Cipa) gave him a short-straw shift before the end of his first week: spend the night in a shed out in the middle of the woods. No explanation. No expectation. All the Sheriff could offer was a flashlight, a shotgun and a word - tradition. It happened every year, and the fresh meat always handled it. Whatever it was. The Sheriff’s son, Deputy Clancy (Alex Bryan), tried to help as much as he could, but if he was in on the joke, he didn’t seem to find it funny anymore. Whether it was a prank or pure waste of time, Stoker would have to wait until the oldest tradition in Beecher’s Gate came knocking at the door.

Jeremy learned everything he needed to know about the world through a VCR. This is why he still avoids abandoned summer camps and can't do math. Horror wasn't his earliest genre of choice, but it was waiting for him; horror accounted for half of his all-time favorite movie, GHOSTBUSTERS. The other half probably accounts for how he ended up working on a live comedy show in college, where he met the merry band of talented, tolerant friends that would form DANGEROUS DAYS PRODUCTIONS. Named after his first attempt to make a Serious-with-a-capital-S movie, Dangerous Days was the earliest working title for BLADE RUNNER, which he shamelessly ripped off for his first Serious-with-a-capital-S movie. Now, it means something else. Horror has a near-impossible flexibility, more than perhaps any other genre. Metaphors become monsters. Zombies are never just zombies. Ordinary people are tested beyond the limits of rational fear by aliens, vampires and other assorted evils until all that's left is their most primal essence. Horror can say a lot behind the screams. Dangerous Days Productions attempt to do just that, to find fresh angles on scary stories that seem all told out and hide a message among the mayhem. And if that doesn't work, God willing, they're at least occasionally funny. For better or worse, that's his only filmmaking absolute: It doesn't matter what you're saying if it's not entertaining. Whatever project of his you might be watching or reading, he just wants to show you a good time.
And maybe spook you once in a while.

I love horror movie cops. I don’t know if it’s the small-town swagger or the fur-collar coats, but I’ve always wanted to make a movie about them. But could I make a scratch-off movie about them?

That idea started with my last short, The Childish Thing. On its face, a literal monster movie. But if you squinted, scratched at the surface, it was about something heavier than bumps in the night. The hope was that it worked equally well on both levels, leaving it up to the viewer to decide how deep they want to dig.
All I had for Beecher’s Gate at first was the concept - a brand new small-town deputy is tasked with handling an annual tradition that nobody’s too eager to talk about. I had my Horror Movie Cop idea. Then Morgan had an idea for the scratch-off layer beneath it. And we were off to the races.

Every detail in The Thing About Beecher’s Gate means something. The way characters stand. The way they talk. The way they live. The way they die. On the surface, it takes inspiration from the stark and grainy likes of John Carpenter’s Assault On Precinct 13. But underneath that is something you might not expect. Something, we hope, very different.

Horror is an endlessly elastic genre, where darkness hides subtext and you never know who’s behind the mask. The Thing About Beecher’s Gate is my no-budget tribute to the low-budget Horror Movie Cop classics that I love, with something more than monsters lurking in the shadows.

Jeremy Herbert,
Writer, Director and Editor of The Thing About Beecher’s Gate 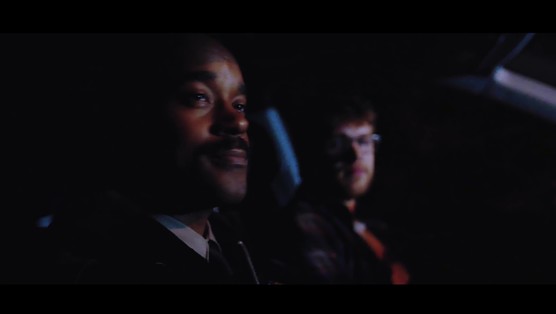