In this adventure/suspense take, inspired by Irena Sendler and her network: As curfew approaches, an everyday heroine risks it all in a smuggling operation from Nazi-occupied Poland.

Cate is a writer/director with award-winning feature screenplays and short films, including the national wildcard-winning Lionsgate/WIF short "Masque,” which also earned her a directing award at the Crystal & Lucy’s. As a director selectee for the Alliance of Women Directors Short Film Program grant, “Of Mine” recently premiered at Disney Animation Studios. Her current film, "The Plumber" is on the fest circuit now, having won the grand jury award at its first screening. She is a fellow and the Future Directors of Studio Features Initiative Director at Blackmagic Collective for 2021. Previously, she served ten years as a decorated military police officer and instructor, and transitioned to Intelligence during Operations Enduring Freedom and Iraqi Freedom, with an additional six years spent as a civilian detective. This "spectrum of humanity" experience helped define her focus in adventure/suspense narrative films: with unconventional characters in extraordinary circumstances, and bold accompanying visuals. She has volunteered for Glass Elevator, Blackmagic Collective, and the Alliance of Women Directors, and is passionate about creating well-balanced, inclusive sets that enable crew members to gain experience and learn from others.

Being able to make this film safely during Covid was a welcome challenge that allowed a very small group of us to take on this stylized period short film. And that is the message we're trying to deliver in a more hopeful tone: even one person can make a big difference - which I feel is reflective of the world we're seeing right now. Through all the hardship and obstacles to our humanity, every day heroes are making the world a better place. "The Plumber" is a story of the mouse vs. the mighty, focusing solely on the working class on both sides of the war. This is not to claim it as groundbreaking social justice fair, rather a little slice of life adventure inspired by real events both past and present. 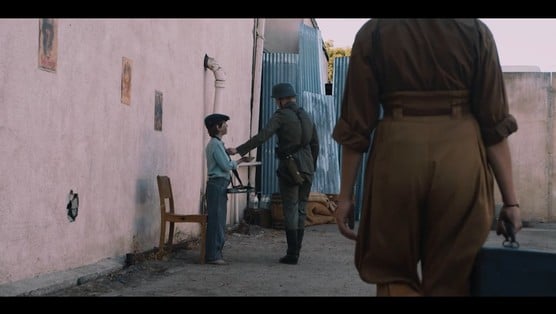