“The face is a picture of the mind with the eyes as its interpreter.” This quote by Roman statesmen lawyer, scholar and academic skeptic Marcus Tullius Cicero was the catalyst for this film to explore the performer’s and audiences relationship with the eyes during performance, and to offer audiences the ability to elicit an emotional resonance by being fully focused on the performer’s eyes and face throughout the film. The Pianist’s Eyes questions the inner nature and performativity of the creation of music with the the eyes being a medium to the inner soul of the performer, and the inner creative process for both performer and viewer.

Scott Sherman is an American pianist, and composer who studies under the tutelage of Pianist Soyeon Kate Lee at the College-Conservatory of Music. Sherman is a co-artistic director with Yaoyue Huang of Music X Habitat X Art, an experimental art and classical performance group. Their two current projects— the installation performance Audible Light, and The Ascent of Movement Series Virtual MUSIC—ART—WORKS, create a unifying communal experience marrying the visual and auditory. Sherman works in video art, film, and installation art practices. His work with MxHxA was exhibited at the 5th Annual Special Exhibition of Justart Space, Guangzhou. His public art film installation titled "The Horizonless River" premiered this May, and will continue in June of 2021 in Guangzhou's Huacheng Square. His work is currently exhibited in the Jupiter Museum in Shenzhen, China.

His recent film project was a collaboration with Pyeongan Kim, titled "The Pianists Eyes". This performance art film focuses on the visage of the performer, exploring both the relationship to the audience and performer through the eyes of the performer and film. Other film projects include, "Stillness", which features composer Hans Otte and attempts to present his music through his philosophy of music and art.

Sherman’s compositions were premiered at the 14th Competition d’Orleans in France. His compositions have premiered in Portugal and in the United States. He participated in the COVID Étude project, and performed The Carnival of The Animals with the New World Chamber Players premiering in China with CCTV in June for the social outreach project “One World—One Family”. His recordings have been used for One-Minute Art publications in China.

This art film "The Pianist's Eyes" was a collaboration with Pyeongan Kim. This film stems from the interest to find contemporary ways to connect audiences with the performer, and to explore philosophical and spiritual concepts through the medium of film and performance. The Pianist's Eyes is intended for virtual audiences to contemplate and experience from their home and their own space--using the virtuality of the experience as an ability to provide uniqueness in a difficult time for both performers and concert-goers. Pyeongan and I were inspired composer Erik Satie to use calligraphy, film, animations, and quotes for a holistic approach to the creation of art. I hope in watching this film the viewer takes something away that is meaningful or that it possibly changes your conception about what art is and can be. 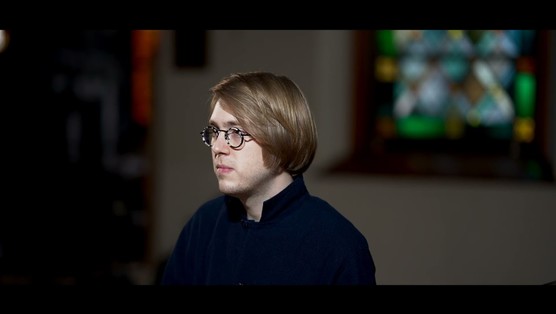