"The Pandemic Dances” is a product of the times and limitations through which we’re living. This series is made with at-hand elements: smart phones, portable lighting, computers, green screen, and shot entirely within the confines of my apartment. The series aims to capture elements of the experience of this time through close-up footage of body movements and gesture work, and is a natural outgrowth of my previous Dances for an iPhone films. Yet this will be a first effort in capturing autobiographical work on film. In the brief time in which the series has been released, it has already been accepted into 14 film festivals and won 6 awards.

“The Pandemic Dances” follow two other award-winning documentaries by Richard Daniels. “Reuven Does the Neighborhood One Last Time,” is a short about Reuven's last journey around his first neighborhood before moving away to a new one. Places he used to love, things he used to do, where he would eat and play, memories and curiosities about his origins explored together with his parents, blend together to shape up Reuven's universe, defining the first six years of his childhood. 8 Film Festival Awards; 17 Film Festivals

"silently, a bloom...," is Mr. Daniels’s short 2016 documentary on the work of artist photographer Stanley Goldberg. The film follows Mr. Goldberg as he finds inspiration in two gardens, prepares work for an exhibition, and allows us to him accompany to the opening. 6 film festival awards; 13 film festivals

Daniels is perhaps best known for his series of Dances for an iPhone Apps, which used technology as a medium in order to transmit modern dance to the general public and which contain 28 short dance films by Richard Daniels. Its volumes have acquired more than 18,000 downloads in over 110 countries. The award-winning DANCING SONDHEIM (Volume 4) encompasses 7 short dance movies with choreography by Daniels and Christopher Caines, all employing the music of Stephen Sondheim.

Dances for an iPhone's Apps and short dance movies were celebrated in public events at the Baryshnikov Arts Center, the Jacob's Pillow Dance Festival, Lincoln Center Dance on Camera Festival, and others. Dancing Sondheim was given an Award of Merit for Dance, Drama, Entertainment and Variety at the IndieFEST Film Awards, the Award of Merit for Choreography at the Accolade Global Film Awards, Honorary Mention Award at the Colortape International Film Festival (Australia), and an International Award of Excellence from the International Film Festival for Peace, Inspiration and Equality. Its movies have also been screened in 15 film international film festivals.

"The Pandemic Dances” flows from my previous dance-on-camera pursuits. Sheltered at home due to pandemic, miles apart from and grappling with my mother’s final days, I created a small dance for her utilizing at-hand elements of lighting, sound, set. This first film is leading into a series seeking to capture the character of the moment in which we're living through intimate dances in interior settings - my first effort to capture autobiographical work on film in movement and imagery. 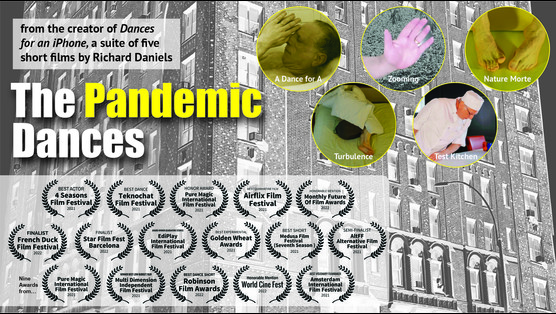