The eternal desire of a man to love a real and unique Woman paints different images in the imagination of screenwriter Ivan Gerasimov. From time to time he meets with the women of his dreams - a romantic young lady, a relaxed prostitute, a mysterious lady with a veil and ... his wife ... Ivan ceases to understand which of these women is reality, and which is only a figment of his imagination. In search of answers, he finds himself in the mystical station cafe Gendelyk. Thanks to the “accidental” meeting with Bartender and Sputnik, various emotional memories from life emerge in his memory: first love, funny oddities, moments of incredible happiness and unbearable suffering. These memories help Ivan understand himself and become free ...

The movie will not be watched easy. The film can be rather attributed to the category of those pictures one should watch when there is an urge to think about life. Thanks to the excellent cast of characters, the viewer can think about persistent problems and worries shown in the ironic form with the philosophical overtone. The intelligible and satirical humor of the heroes allows to sincerely laugh at jokes, and joke themes give the opportunity to someone to recall youth, and to another one – to think about the future. And, as a result, the most important and positive achievement of the movie is the fact that it allows to refresh the view of many problems and life in general, to encourage feelings and perception. After all, the most interesting thing in this Life is its contrasts and diversity.
Dialogues and monologues of the heroes cover the banal-global problems of people in the peculiar sarcastic manner and are accompanied by the personal fantasy and humor of the heroes. But, the most important thing is that this movie is about all of us and each one taken individually. In the film, there is almost nothing fictional; everything is taken from the life and personal experiences of the author.
The deep philosophical stories and incredibly ironic humor of the heroes will interlace in one movie. The cast of characters, among whom the famous Ukrainian actors act even minor and insignificant parts, will spice up. In the short novels, all the characters and stories are presented as very bright and beautiful ones. Here, stupidity is incomparably raised to the form of grotesque, destroyed by laughing at itself and brought to the point of absurdity. There are no invented stories and everything happens as it often takes place in life. Each of the stories teaches something, and in each of them, there is some admirable morality.
The movie “Gendelyk” is intellectual and not for every viewer. Usually, one wants to review such films several times, because it is almost impossible to catch all the little things at the first try. The movie has many symbols. And, the movie makes the viewer to think about his own life, his own behavior and events around him.
Indeed, it is difficult to find an Author, who can so truthfully demonstrate all aspects of life. He would like to live according to the scheme, but he does not recognize any dogmas and tries to destroy them. The Author contemplates life and seeks an ideal. He finally formed a vision of the ideal person.
The main task of the movie “Gendelyk” is the true, but satirical representation of life. The human nature is imperfect; therefore, it is difficult to see only righteous persons on Earth. The Author paints life as it really is and ridicules it…But to make it funny to the viewer, it is necessary to show an ordinary individual in his everyday existence. To show the diversity of life, the Author satirizes what he would like to see in his ideal.
“Gendelyk” is a real Ukrainian dramatic movie on the love topic. 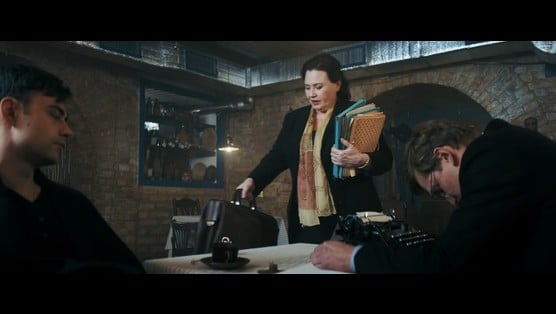