When I was a little girl, I saw a movie about space,
where people of the future could treat painlessly without cuts.
It became my dream,
which my team and I were able to make true.

My name is Igor Buzaev. All my life I was working on the connection between different pieces of knowledge and skills.
I was trained in medicine, laws, management, little bit of music, and tai-chi, I was working as a fitness trainer, IT-specialist, and I can even fly a light sports aircraft.
I am a Ph.D. and Doctor of sciences in medicine. When I graduated from medical university my dad was literally took holding my hands to teach me all motions and tricks in the cathlab operating room.
He was a great artist in interventional cardiology, one of Russia's pioneers in this field, a photographer, philosopher, and a teacher.
I also co-founder of the first in Russia MRGFUS neurosurgery center we opened previous year. https://buzaevclinic.com
Now I am the professor in Bashkir State Medical university.
I do not stop my education not only in Medicine, I also study MFA at University of Anaheim Akira Kurosawa school of film now.

The ideas of humanism and the importance of their disclosure in creativity served as the basis for the choice of the University for me. Akira Kurosawa said that when a person dreams, he is a genius. The proposed film is my student film. It tells the story of the eight-year-old daughter of a tremor-suffering artist, who, inspired by science fiction, makes her dreams come true.

The film is based on real events and tells about the path of my beloved wife, who from the very beginning of her acquaintance with neurosurgery believed that there is one wrong moment in surgery: in order to fix a small problem deep in the human brain, it is necessary to get to this area by applying even larger damage. In search of more gentle techniques, Rezida finally found one technology that allows surgery to be performed without incisions at all. Having learned it, she brought this technique to Russia and opened the first center in Russia where such treatment can be carried out.

In my opinion, it is important to instill in children the belief that their good dreams will come true if they believe and go to them persistently enough. I would like people with tremor to know that it is possible to help them now.

I deliberately linked time into a spiral through the picture and slightly violated the linearity of time in order to show that the future, present and past are interconnected in the realization of those good goals towards which humanity is going throughout its existence.

This is my first student film, but in the filming process I applied the same approach that I always use in my life in management - I try to give my team members the opportunity to open up on their own as much as possible. I was warned that making a movie with a child in the lead role can be very difficult. But the star of this film, Ailin Askarova, is an amazingly shrewd girl. She doesn't need to be told what to do, just tell her a story and ask how she would act in this situation. The music for the film was written by pianist and composer Ruslan Vorotnikov, whose irony and narrative style made it possible to further reveal the contents of the film.

It is important for me that the result of the artist's work is the improvement of society and the formation of good human values, and I hope that my experience, embodied in this film, will serve these goals. 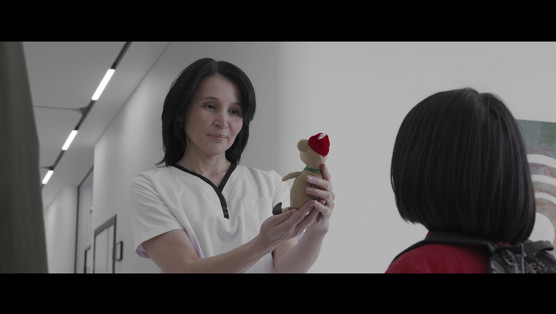