Turner Risk has been the victim of bullying since a young age. One day he decides to strike back by clearing out all the negatives in his life to effectively reboot his world. When his deadly plan becomes clear, his only friend, Robbie Cruz, jobless and struggling to make ends meet, teams up with his new companion Seth and high school nemesis Conner to stop Turner – but first they have to find him. Thus begins their longest journey together: a day of sudden tragedies and, ultimately, of unexpected revelations.

Michael Dailey is an Irish-American director, editor, and screenwriter best known for his short “The Backpack” and premier feature Turner Risk. Dailey filmed his first award-winning shorts at an early age: “Twister,” about a tornado sweeping through a summer camp, and “Quietus,” which focused on youth gangs during a small town religious conflict. Recently, while teaching film to future filmmakers, Dailey studied with screenwriting gurus Syd Field and William Goldman. Soon afterwards he began designing his first independent productions, including the short "The Backpack" (2012), in which two innocents inadvertently become involved in the fallout of a domestic terrorism attack. But Turner Risk (2019), his first feature, would prove to be the culmination of all his filmmaking experiences. In 2011 Dailey co-founded Phenomenon Filmworks – an independent film studio created by 2 actors, 2 screenwriters, and 2 directors – its mission to develop projects that embrace open, diverse casting and thoroughly original storylines showcasing intensive acting. Dailey is currently in the planning stages for several upcoming short and feature films.

Turner Risk began in a walk home from kindergarten with a classmate I’ll call, well, Turner Risk. He was a very thin, nervous fellow, bespectacled, bucktoothed, socially awkward, and prone to unintentional quivering. But I didn’t care. He was one of my first friends. In kindergarten, he functioned naturally, his idiosyncrasies virtually unnoticed by our classmates. But as one grade subsided to the next, other students picked up his quirks and decided he was not “normal” by their standards. Turner was then thrust into a tornado of intolerance, simply because he was deemed different. Our relationship is the core of the film.

Turner Risk focuses on a single eventful day in the lives of Turner and Robbie Cruz, Turner’s only friend. Both are at a pivotal point in their lives: Turner seeks to re-boot his life by removing all the negative forces in it, while Robbie struggles to find a job and sustain his independent lifestyle. Both make decisions that ultimately interconnect – as they have for years – but now they are mostly reaching for change, unaware of the exponential impact change can cause.

Turner Risk is my first feature as writer/director after years of creating short films. I approach each film with the idea that a unique design is needed to support its story. Turner Risk, for example, reflects a modern spin on the bold, innovative works of the 1970s, so I chose to capture their essence in a neoclassic way. I have also been fortunate to participate in real industry film productions and learn the intricacies of screenwriting from Syd Field and William Goldman. The fusion of these experiences contributed to every stage of this project.

But Turner Risk is the product of many – and our collaboration was electric. Each day was profoundly fun and productive, my creative team working tirelessly to support a vision we all shared. In that way, each of them was a leader, and their efforts can be seen in every shot, every scene, every stage of production. The young actors performed with an energy that can only be described as “nuclear”: they were hungry to play characters that pushed their limits, produced real laughter and tears. And Dara Taylor’s beautiful score perfectly captured the sensitivity of our story. Simply put, Turner Risk is all of us.

The overall experience I'm most trying to communicate through Turner Risk is that life is an adventure that can never be calculated. Instead, it is impulsive as hell – and how we confront the many challenges it brings fuels our endurance and affirms our independence. With that in mind, Morgan Lintz and I built our script on the belief that each of the character’s triumphs and failures are universal. Authenticity was key, so we relied on personal experiences and meticulously crafted our characters as hybrids of real someones we knew.

While this film can sometimes be brutal, it’s rooted in beginnings, change, and how inadvertently funny life can be in even the most trying times. At its core, I wanted the film to connect with a big audience, to assert a progressive and innovative way of promoting one of the most essential human attributes: Tolerance. 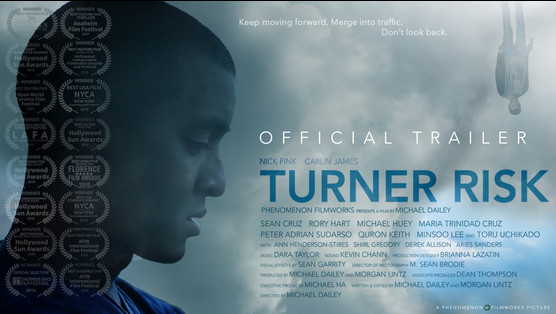