Mr. Smith (Brad Simanski), finds a kitty (Annie) and falls in love with it. When mad scientist, Dr. Schrodinger (Ethan Estes), commands Mr. Smith place the kitty in a box with radioactive materials for a dastardly experiment, the assistant is in agony! Will curiosity kill the cat?!?! Will Annie become radioactive kitty litter?!?! The men open the box together to find out solve the scientific mystery!

Director, Producer, Actress, Special Effects Artist, Talent Manager - Gigi "Fast Elk" Bannister (formerly Porter) has been in the film industry for over 40 years and recently graduated Riverside City College with an Associate of Science degree in Film, Television and Video production. "Discovered" while working in a diner in Texas, Gigi started her entertainment career as an in-house model in the '70s contracted to Dale Blanc' & Associates. Her diverse background includes actress, makeup artist, special effects artist, agent, manager, writer, director and producer for stage, film, television and live events. In 2012, after working in the industry since the age of 14, Gigi decided to return to school in pursuit of a degree with the goal to eventually teach others what she has learned in the real world of filmmaking. While there, she has worked on several student projects - including directing and starring in a student film entitled, The Intruders, (a reboot of the Twilight Zone: Invaders (1961) with a twist ending unique to her style) which is making the festival circuit and which was selected by LA Cinefest and Superman Celebration Film Festival. Her recent directorial project, Schrodinger's Cat, is b&W/color 16mm transferred to digital and is premiering at the Riverside City College 19th Film Festival.

Schrodinger's Cat is a 16mm 1min: 38 second project in B&W and color starring Brad Simanski (Mr. Smith) as a laboratory assistant who finds a wayward kitty (Annie) and takes her in only to be ordered by the mad scientist, Dr. Schrodinger (Ethan Estes), to jeopardize Annie by placing her in a box with radioactive material as part of a dastardly experiment! Will she live?!? The truth will only be revealed with the opening of the box!

Better known for her practical special effects and production work, Gigi is comfortable on both sides of the camera. She's appeared in over a dozen films and television shows, is a popular guest at horror conventions, film festivals, workshops and seminars. Gigi is also credited as a producer, production manager, location scout, film liaison her most recent project was with her husband as a Producer on Don Coscarelli and David Hartman’s “Phantasm V: Ravager” (2016) and Steve King's "One For the Road" (2011) (Night Shift Anthology). As a character actor, she's appeared as the tormenting Mother Mary in "Bloody Bloody Bible Camp" (2011), the enchanting Bearded Lady in "Carnies" (2009), a hygienic Trailer Gal in "Small Town Saturday Night" (2009) (with Chris Pine, John Hawkes, Reggie Bannister, and Perry Anzilotti), and again in Don Coscarelli's "Bubba Ho-Tep" (2002) (Bruce Campbell, Reggie Bannister and Ozzie Davis), The Sheriff's Wife in "Spring Break Massacre" (2008) (Reggie Bannister), and many more. In another Coscarelli production, of the 14 positions she worked, Gigi was credited as Special Effects Makeup Coordinator for Phantasm IV: Oblivion (1998). She has produced and directed on numerous projects including dozens of live events, fund raisers and seminars, six (6) independent feature films, and six (6) shows for television. Gigi has made a unique mark for herself in writing, directing and producing political music videos. Her first, was a Native American music video, “Love That's Gone” (1997), protesting the ongoing Yellowstone National Park buffalo slaughter. Her next was “Land of the Free” (2001) showing the necessity for park land in Long Beach, California. She co-wrote and produced “Baby That's Not Right” (2007) based on husband, Reggie Bannister's, original music.

Her talent for writing was realized early in life. She's a Golden Poet recipient, has completed a children's story, "The Adventurous Mr. Tiggy," and currently working on a Native American Horror script. When she submitted her original short script, "Miracle,"(a Native American film about the birth of a white Buffalo at Christmas) to both the AFI Director's Workshop for Women (making it to final cuts) and Lake Arrowhead Film Festival, she received the following review: "I loved it! I think this can be expanded to at least an hour's worth of film and would, obviously, make a great holiday TV film... The voices ... were genuine and believable... I believe you have the makings of a wonderful classic! Congratulations!" (Lauren Stone) After producing and hosting a chat show for decades (“Nightmarez Café" as Vampi the Vegetarian Vampire”), she now often produces for public service announcements, “Every 15 Minutes” (high school Anti-Drunk Driving Program), Battlefield Effects, and Mass Casualty/Moulage Makeup. She is her husband's personal manager for his music and film careers. Her pet projects include community service, Haunted Houses and Free Film Camps for youths in her mountain community through her non-profit, the Crestline Creative Arts Foundation.

My motto was given to me in 1987 by a dear friend, Chis Malanowsky: "I just want to make movies!" I have tried to live by that motto ever since. Every project is like giving birth. One brings the concept from a spark of thought into a tangible thing which lives and breathes for eternity on the screen and in the hearts of others. It is the legacy of all who worked on it. If we are lucky, we are fondly remembered for it and it lives on long after we are gone.

Schrodinger's Cat is based on the scientist, Erwin Schrodinger, who won a Nobel prize in Quantum Physics. Shot on location at the San Timoteo County School in Redlands, California, I was honored that we were able to bring such huge production value to a small project and give fellow students a quality hands on filming experience.

As fan of Charlie Chaplin films, I wanted to bring the comedic timing to the story and our actors (Annie the Cat included) did that in abundance. B&W film is a dying art and one of our favorite films my husband, Reggie Bannister, and I worked on was, "The Ghastly Love of Johnny X" (2012) which, in our opinions, should be required viewing for film students for it's technical and its historical value. As my senior project at RCC, I wanted to direct and produce a project that would leave a lasting impression and one that my instructors would be proud to be able to reference other students back to in future classes.

My husband, Reggie Bannister, and I are so proud of our amalgamation of Riverside City College student crew and cast, volunteers from Crestline Creative Arts Foundation, Professionals, Friends and Phans who have helped give this "baby" life.

The Bannister's anticipate the imminent release of Phantasm V: Ravager. 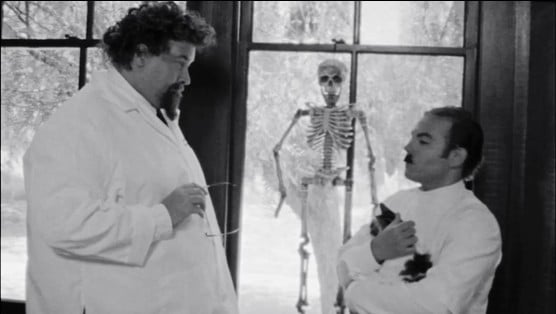