Passing through the Shrine's Gate

This movie is about a girl from NewYork who goes on a journey with Her Japanese grandpa visiting shrines around Japan.

A teenage girl from New York visits her Japanese grandfather who takes her on a journey to some of Japan’s most famous Shinto shrines. During their travels, Grandfather tells the story of Minakata Kumagusu, a naturalist of early 20th century Japan.

“Whenever Kumagusu took walks in the forest, he would take a compact microscope along with him so he could observe the slime molds. They’re like tiny gods that can’t be seen with the naked eye, but these microorganisms work to connect the worlds of plants and animals. Kumagusu ventured deep into the sacred groves of Japan’s old shrines in search of these tiny gods – the slime molds which formed an important part of the ecosystem.”

Grandfather takes us on a journey deep into the sacred groves of Japan’s old shrines.

I wanted to film the breeze in the sacred grove of a Shinto shrine.
This film is not about religion.
I did not consult experts in the field, nor have I received any support from organizations of any kind.
This film is about place – a particular kind of place.
I wanted to take a look at places I have visited regularly for the past ten years through the lens of the camera – certain shrines and their sacred groves – to record them and plot out their story.

When you walk through the gate of a Shinto shrine you’ll notice that the air you breathe changes. The air is fresher and there’s a delicious scent because of the trees and other plants growing inside the grounds of the shrine.

Buddhism, Christianity, and Islam have scriptures, which have influenced languages and literatures, as well as offering a feeling of solace or redemption to those who read them.

But Shinto has no written scripture or recognizable dogma.
There is only the shrine.
This is the place where rituals of cleansing and purification take place. There is no written scripture or clearly spelled out dogma, so there isn’t a language influencing people, nor is there necessarily a feeling of redemption. There is simply the fresh, clean air in the sacred grove for people to breathe. Rather than a particular message in the form of language, the Shinto shrines of Japan have given people the sense of the body being cleansed.

The name of my production company is Saijiki (歳時記). It comes from the title of a collection of seasonal words (kigo), which are used in composing haiku poems. The collection was put together during modern times, but the concern with the seasons in literature goes all the way back to the earliest works of the Japanese classics. The word for “language” in classical Japanese is kotonoha, which literally means “leaves of words.” In equating word and leaf, there is a connection made between language and nature. In fact, the introduction to the classical poetry collection, the Kokinshu, states that the seeds of the heart cause these word-leaves (language) to grow much in the same way that plants grow. Hence the sacred grove on the grounds of the Shinto shrine can be thought of as a form of scripture.

Since ancient times the Japanese have prayed to mountains, rocks, waterfalls, the sea, trees, the rice plant, cocoons woven by caterpillars, and the sun.

In the warmth of the sun the leaves on the trees grow luxuriantly, and through the years the Japanese have continued to weave words into poems that sing of the seasons.

People feel more deeply connected to the natural world in this place provided by the shrine, and this encourages the growth of new things and new expressions. 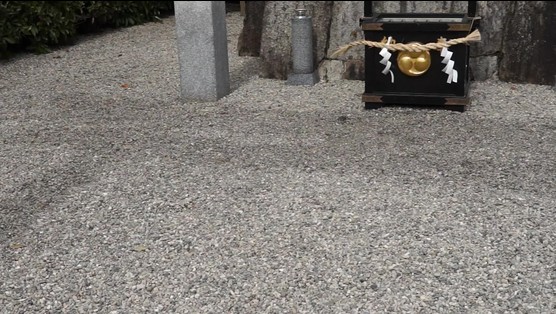