In 2010, with Resolution 259, the United States Congress declared Andrea Palladio "Father of the American Architecture." The documentary draws a line in space between the two shores of the Atlantic and presents five centuries of works by Andrea Palladio and those he influenced. Palladio could probably be defined as the first “starchitect”, having influenced the history of architecture like few architects before and after him.

SYNOPSIS
Palladio is probably the 1st film on architecture theory and history for the big screen. It is certainly the first made with means normally used for the greatest commercial productions (8KHD). The first to be launched at national level (more than 400 theatres in Italy). It was the most watched documentary on architecture, being 5th in the Italian box office chart during the projection days (May 20th, 21st, 22nd 2019), right behind Pokemon and surpassing The Advengers. It evokes crossed-stories between researchers, architects, restorers, and in particular the one of a young teacher-historian-architect (Gregorio Carboni Maestri), who studies, teach, live and preserve his works, passing his legacy to future generations.
Palladio is a film project dedicated to Andrea Palladio, the architect who, with his work, has become one of the reference points for the most important power buildings in the world. It is a journey to discover Palladio’s ancient world and modern legacy. The New York’s Wall Street Stock-Exchange, U.S. White House and Capitol in Washington D.C. and many other representative buildings were built directly or indirectly following the indications that the master. Indications codified in his written work 450 years ago. It is not a historical or biographical documentary, but a film of a new genre, a documentario di tendenza. Which sees the great architect and his legacy in the contemporary world through the eyes of those who study, live and preserve his work for future generations. In particular, a university teacher in Brussels, Gregorio Carboni Maestri, tries to explain Palladian architecture and theories to his young students of "Generation Z".
Born in Padua in 1508, the son of a modest family, Palladio began as a simple stonemason, becoming the most beloved and prized architect of the Venetian Republic. Through the study of the magnificent Roman ruins, he reinvented the classical style and forever changed the history of architecture, closing the Renaissance era and opening the Modernity era. A master of proportions as well as light and matter, he codified the modern agricultural villa, built palaces and churches in harmony with man and nature. His treaty The Four Books of Architecture closed the work of a lifetime and established a universal language that influenced generations of architects around the world. Thomas Jefferson used them as a model to establish the symbols of the newly independent United States of America.
Palladio is a choral story that separates different narrative. A cosmopolitan professor, Gregorio Carboni Maestri - also the film’s scientific director and co-writer - arrives in New York in search of Andrea Palladio’s legacy and in ways to pass on his humanist values to new generations in public and mass- university. At Yale, young architects of tomorrow are also confronted with the contradictions of American Palladianism. Palladianism that was a symbol of democracy but also used by owners of slaves for their villas. The documentary touches those contradictions, explaining the ideological relativity of architecture. At Villa Saraceno in the Venetian countryside, three restauration students spend a weekend with international academics gathered for a lecture on Palladio. There, these narrative lines meet.
The feature documentary is a journey between New York, Virginia, Washington D.C.; Brussels, the Veneto’s villas and Rome’s classical temples. Strict and evocative images bring to the big screen iconic buildings such as Villa La Rotonda, Villa Foscari La Malcontenta, Venice’s Retentor and San Giorgio Maggiore churches, the White House, the U.S. Capitol, Rome’s Pantheon and Forums. Architects and scholars such as Peter Eisenman, Kenneth Frampton, Gregorio Carboni Masters, Antonio Foscari, George Saumarez Smith and Alexandra di Valmarana are protagonists of this journey. Although already sick, Lionello Puppi, one of most important Pallaianists of his days, participated in the filming with generosity and passion, giving a final testimony of a life devoted to Palladian studies. Puppi died in Treviso shortly after the end of the film that is dedicated to him.
Contemporary Palladian’s. The scene at a table in Villa Saraceno is one of the film’s most important moments. An authentic encounter between “contemporary Palladian’s”, owners and inhabitants of villas (such as Count Antonio Foscari, Count Nicolò Valmarana and Cristian Malinverni), experts (Gregorio Carboni Maestri, returning from a journey in the US), restorers and Scholars who discuss at a friendly banquet to make the most of Palladio’s ancient and at the same time modern universe. The guest’s scene at Villa Saraceno was made possible thanks to the contribution of the Landmark Trust, British owner of the villa. The realization of Palladio was supported by Veneto Region’s Film Commission in collaboration with the Tourist Consortium Vicenza È, Lombardy Region’s Film Commission, Latium’s Region, Latium Cinema International and The Landmark Trust. 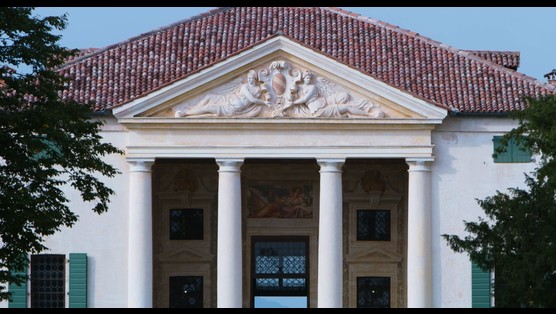