A multi-species both sensory and discursive encounter with competing knowledge practices in the current honeybee health crisis.

‚beewildered companions’ is an immersive ethnographic study on the socio-material entanglements of humans and honeybees in times of globalised diseases. Triggered by the migration of a small bee parasite from Asia, the culture of beekeeping in Europe today is deeply shaken. The search for new and better practices is also a struggle of different imaginaries regarding the ontological status of the honeybee as domestic or wild. Can and should a serious disease be controlled by medication or breeding? Or is it better for humans to give up control, as in the long lost craft of tree beekeeping. Only in the deep forests of Bashkiria the tradition is still alive. The cultural appropriation of this knowledge in Central Europe could be an important pillar for a sustainable solution to the crisis. Three multisensory-observational and three plurivocal-discursive chapters juxtapose the diverging inner attitudes with the corresponding practices of animal care.

Funded by the bavarian film funding, the documentary is part of a research project on the honeybee health crisis. The fieldwork for both the research and film took place between 2015 and 2019.

is a cameraman, director, and cultural anthropologist who focuses on ecological processes and science and technology studies. He began making films in 2006, has assisted Heinrich Breloer and Jörg Schmidt-Reitwein, and has been Director of Photography for two feature fiction films as well as some short fiction and documentary films. He has conducted ethnographic research in Kosovo, Southeast Asia, and Siberia. Besides his doctoral research at the Munich Center for Technology in Society (MCTS) he teaches Audiovisual Anthropology at universities and other institutions in Germany. Together with Miriam Remter he founded Primate Visions film and media production. 'beewildered companions' marks his feature length documentary directorial debut.

is a cultural anthropologist and freelance filmmaker. Since 2008 she has worked as an author, director, sound recordist, and editor. She holds a PhD from the Ludwig-Maximilians-University in Munich where she currently teaches as head of the Visual Anthropology Masters program. She has completed several short documentary films (AugenBlicke, 2008; Bild-Diskurse, 2011) and, together with Felix Remter, is the co-founder of Primate Visions film and media production. 'beewildered companions' is her first feature length documentary. 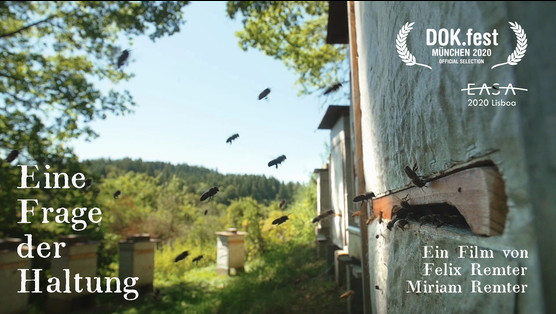