OFF WITH HER HEAD

A demigod who has descended to Earth in hopes of participating in a human life is placed within the body of a woman, Marie Antoinette. There he experiences man's inhumanity to man in parody and comedy. He is beheaded, and ascends back to his original fiery self more whole than before.

Camelia Rose Finley has worked professionally in the film industry for eleven years. She has an MFA in Creative Writing, and an BA in Film/Creative Writing. Her work is influenced by the theatre of the Surrealists and the Grand Guignol.

If you would like to see this film in 3D virtual reality, rather than the attached 2D version, please go to this link:
https://youtu.be/NZ-B32zY3k8

This surrealist film explores, in satire, the salacious pamphlets written about Marie Antoinette before her beheading.

It happens that these story images are deliberately chosen from the arena of written media during the start of the French Revolution; rather then placing them in conventional order, they have been selected for the path of the irrational absurdity of their content. Patriarchy is illuminated through the use of male actors in multiple roles, both accurately aligning the time period and revealing the possible climate we are currently experiencing. The writers of these eleven pamphlets created a lore around the queen which led directly to her beheading by guillotine. Performing these pamphlets shows both the comedy of the ideas they portrayed, but also the danger in the subtext of those fictitious words. Some of their favorite and best selling pamphlets had lude characters in cahoots with Marie Antoinette, including bestiality, orgies, encounters with criminals, prostitutes, and more. These lies are entertaining and yet played a part of her mortal end.

"I do not know of any religion that does not declare women to be feeble-minded, unclean, generally inferior creatures to males." Leonora Carrington.

Perseus murdered Medusa, and in such we have made burning piles of women ever since.

In this climate it is the counterpoint to have Marie played by a man, experiencing a woman's inability to control her own narrative.

This was originally written as a play in the fashion of the Grand Guignol. When I decided to shoot it as a feature I worked within the ideas of Dogme 95. I invented a way to shoot quickly as we only had three days. The first take was from the script, the second take was formal but the movement could be looser for the actor. And the third take was called a Fuck You take, meaning the actors could do whatever they wanted. The final edit is a combination of these. We shot during the pandemic and so all actors had to have their vaccine shots, and we did not allow any outsiders to attend the filming location. Further we shot only for eight hours each day, as I am resistant to multiple takes and twelve hour standard days.

As an installation the costumes, monologues, and location transmit a distinct feeling of catharsis through the story arc, acting as multiple triptychs in a row.

Shot completely in an abandoned railyard, with a 360 virtual reality camera, the location lends itself to a feeling of reality vs insanity, immortality vs mortality, fantastic vs the domestic, and the comedy of existence. 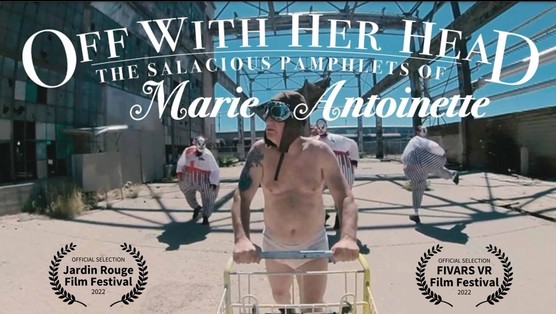