This film marks the one hundred year anniversary of female suffrage for some women in the UK. Two women and their counterparts one hundred years earlier are making banners on the eve of a march for women - the first for votes for women and the second for women's rights. Through their conversations and the presence of a mysterious poetic and out of time visitor the film reflects on the parallels and differences between the concerns of women in the era of the suffragettes and women in the contemporary era of Trump and Me Too.

Redell Olsen is a writer and poet who uses film in performance and installations. 'Now Circa (1918)' is the first film she has directed with other actors.

'Now Circa (1918)' is a poetic film essay in dramatic form that quotes extensively from original archival research undertaken at John Rylands Suffrage Collection, Manchester and The Women’s Library, LSE. The film embodies historical detail and texture relating to the material culture of the suffragettes: such as the handwritten inventory of costs for a march in the dialogue at the beginning of the film. It also includes historical facsimiles of banners (made by Ruth Livesey according to instructions by Mary Lowndes – a founder of the Artists’ Suffrage League c.1913) and an original and unpublished poem 'In Memoriam (to Emily Wilding Davison)' discovered in manuscript form in the collection at the John Rylands library.

'Now Circa (1918)' reconstructs the differences between suffragettes and suffragists, distinctions often lost in the popular reception of the suffragettes. The film sets female suffrage against a micro-history of different generations of feminism into the present. The film contrasts debates in 1918 with similar debates in 2018 through synoptic encapsulations of the #Me Too movement, the 2018 Women’s March, Times Up and opposing female voices.

Now Circa (1918) offers a stylistic homages to the neglected oeuvre of 1940’s film-maker Maya Deren in Joan Boadicea's crawl down the dinner table. It also embodies an avant-garde feminist poetic realisation of the spirit of Joan of Arc and Boadicea – a poetics in part inspired by readings of the suffrage plays of Cicely Hamilton and Christopher St. John and the contemporary writings of Carol Churchill.

The project was initiated and part funded through the Vote 100 celebrations at Royal Holloway. Now Circa (1918) was one of the contributions to a day symposium organised by Ruth Livesey and Redell Olsen which featured papers, talks, readings, exchanges, banner-making and a procession at Bedford Square, Royal Holloway: https://womensuffragewritingbedfordsquare.wordpress.com/. Support funding was also given from the Judith E. Wilson Fund, University of Cambridge. 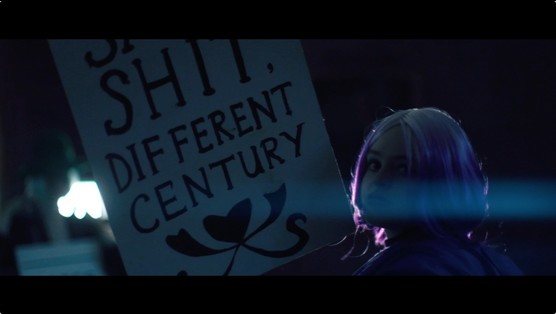