In 2014, Sofia's peaceful life was invaded by the war, when she received a news informing her that the humanitarian plane that her son was flying was shot down over the occupied territory, where there is war.

After receiving an unsatisfactory response from the military regarding her son's life, she packs a small suitcase and travels to the occupied territory, to find her son.

Sofia understands the danger, however is determined to find her son. While traveling by bus, at the border, she gets saved from the militants by a local resident - Fedir.

Fedir treats Sofia with sympathy, takes care of her and agrees to help her with finding her son. Sofia finds out from Fedir that the pilots are being hunted by the russian mercenary by the name of Malahin and his squad, as you can trade a pilot for a russian officer from the ukrainian side, or get a hefty bounty from the russian side. However, Malahin is not the only one on the bounty hunt for pilots, as is the local mercenary leader by the nickname Coyote, who used to be a local detective that chose to travel on the mercenary path, for monetary gain, and is not afraid to go against Malahin.

The news channels have shared a news story, that Coyote has picked up a wounded pilot, and placed him in a local hospital under his own security. Sofia, not minding the risk, runs to the hospital. At the same time, Malahin travels to the hospital, and has a conflict with Coyote.

Disguised as a nurse, Sofia goes past the security and ends up in the same room as the wounded. He turns out to be a friend of her son, one of the members of the plane crew that got shot down. Sofia decides to get the wounded out of the hospital as soon as possible. With help of Fedir, they are able to get him out, however, during the chase, Fedir is wounded. They end up in an empty village engulfed in war, in Fedir's parents house.

Sofia, understanding the danger of staying too long in this village, got in contact with ukrainian scouts and handed over the wounded to them, and they transported him to Ukraine.

Finding out the location of the crash site from the wounded, Sofia, not thinking twice, and not minding the danger and risk associated with it, travels to that location.

Tired while walking through a field, Sofia stumbles upon a minefield and returns to the nearest settlement. She ends up at a small village, and meets a woman by the similar name of Sonya, at the edge of the village. The woman is preparing a funeral meal for her son, who died fighting against Ukraine.

The pain of losing loved ones brings the women together, they become ftiends understanding the absurdity of war and they prepare the food together. Sofia learned from Sonya that Ilya, her husband, has been at the plane crash site and asks him to help guide her to the crash site, as she believes that he is still alive. Ilya informs her, that while he was at the crash site, he found the bodies of two pilots and buried them there.

He mentions to Sofia that he saw how the plane was falling, and if not for the heroic actions of the commander of the plane, the plane would have crashed into the village. Therefore with his own life, he has saved the lives of many villagers.

Coyote comes to the memorial service, and he turns out to be the brother of Sonya. Noticing Sofia, he remembers her from the hospital, and that she was the one who got the wounded pilot out. Unexpectedly, the mercenary Malahin has stormed into the house with his crew, as he searches for the missing pilot.

Blaming each other for the betrayal, Coyote and Malahin engage in a conflict, in which Malahin suspects the parents of Coyote and kills them. Sofiya, in the meantime, with fear, observes the meaningless bloodshed.

Sofia, arrested by Coyote, gets transported to Malahins headquarters, where Coyote and Malahin get into another conflict, during which Coyote kills Malahin and runs off.

Sofia gets saved by a Ukrainian scout, who transports her to the crash site. At the burial site, Sofia says goodbye to her son, and taking a handful of freshly placed soil, returns home.

The film based on true stories. The director, in tandem with the wonderful play by the actress, managed to organically reveal the image of an Ukrainian woman, combine a tense, drama filled story with the feminine image of the main character. Through the eyes of the main character, we see the life of people living in the occupied territories, the faces distorted by the war, the crop-devastated farmland, the life that was stopped by the war.

The woman suddenly finds herself in a completely alien and aggressive world, where everything is full of hostility, hatred, misunderstanding and unwillingness to understand others. In this hell, she is not only looking for her son, but having in her heart great love and merciful character, she changes all who she meets in her way. And most importantly, she transforms herself - she finds a truly sacred power, she fights a senseless war and in her eyes despair, insecurity and fear are reborn in the eternal mother spirit of the land, that returns the sons home - dead or alive.

The distinction of the Mother of Apostles is the almost unique manner in which it tells its stories -
showing the opposition of antagonists, by exposing the conflict and then we unravel it ourselves. We do not analyze who is right and who is wrong. We walk their paths with the main character, avoiding critical turns in favor of a colorful description of the heroine, showing the depth of her image.

P.S. Last year, after talking with selectors from several international festivals, the director made some improvements to the film's storyline and music. The film has significantly improved its artistic quality. 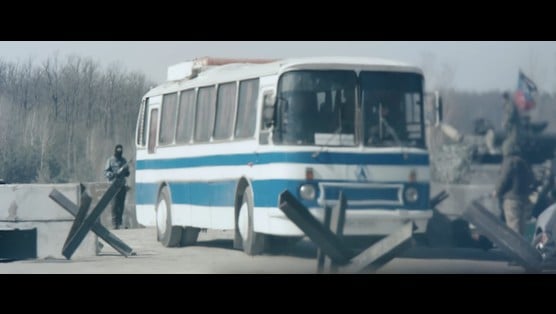