"When life is meaningless and everything is hopeless, where do you go?"

Inspired by the life of Danny Germansen.

Manifestation is an semi-autobiographical art-house short film about a mentally ill person who takes revenge on society because he feels neglected by his family, the social system, the community around him, and Society in general. He was mentally abused as a kid and adult by a psychopathic father. The film draws parallels to the environmental issues of the present and to the white supremacy that created our capitalist society that we live in today. It’s a tale of a social outcast who suffered weltschmerz and lived a life of loneliness, alienation and isolation in a society that is emotionally desolated. During the 17-minute film, the viewer experiences a nihilistic view of the world from the social outcast’s point of view.

Danny Germansen (Born 1976) is a award-wining filmmaker and video-artist who was raised in a dysfunctional family in a little town on the west coast of Jutland in Denmark called Ribe.

Playing music most of his teenager years, Danny first started to work with video and film at the age of 21. His main body of work are inspired by a life with disability, depression and mental breakdown.

Danny’s early work with films has been used as therapy, a way to work himself out of a low point in his life from his 20’s up thru his 30’s years of life, where he was suffering from severe depression, mental agony, isolation and loneliness – Caused by his troubled childhood with two spinal surgery operations at the age of 9 and 14 which left Danny paralyzed and in a wheelchair. Plus suffering abuse from a psychopathic father who damage him emotional and mentally for life and in the same time also experienced neglect from family and friends.

Those early works that can been seen in the video collection INNER PROJECTIONS FROM A BROKEN MAN. Is videos that show emotions and thoughts from a mental breakdown told thru the media of video.

But Danny does also do other topics as political, social-society and philosophical related work, music and art. Danny’s work has been shown around the world at festivals and various venues. Go to Brujo Art Company website | BrujoArt.com – For more info and to stream films, video-art, and music.

In 1998 I had to stop my education at European Film College and go back home to my birth town. I had to stop school because of problems I was not aware of before now, here over 20 years later.

What I returned home to was my broken family. My parents’ divorce years before and my father’s recent bankruptcy that was caused by his alcoholism.

My father’s deviant lifestyle was not helping the fact that I had been an invalid and handicapped since I was 9 years old; and had spent most of my childhood in and out of hospitals. Still, I fought my way back to school and my good friends with a lot of physiotherapy training.

I had been living in a family that was full of narcissist and psychopaths, which I was not aware of until 20 years later after my father’s death and after many years of work with a psychologist.  Now when I make this film, I can see what happened to me.

My childhood was full of neglect and mental abuse. I had to live with mental violence combined with all my illnesses. And the only way to live with big egos is to brake your own ego, bow your head down, and try to fit in, just for a chance to survive. Just to get through the day.

So the neglect made me feel worthless. And every time somebody showed me that I had value, I was not able to handle that emotion and always fled the scene; and also, without being aware of it, pushed good people around me away. Those were positive emotions, and I could not handle them. And I would go into a panic and hide myself.

This happened when I was 21 years old and I isolated myself in my apartment. I was depressed that life had not worked out as it could have happened - if I was not neglected as a child I would have been able to finish my education and live the life I was supposed to. A lot of loving and friendly people tried to help me and wanted me as a friend to work in art and in film. And that’s where my problems caused by the neglect had a devastating effect on my life. I had just turned 21 years old. But I pushed all those friendly people away and ended up isolated in a small apartment used and abused by my alcoholic father.

During the period of my isolation and depression, people I knew started to ignore me, avoid me and dislike me. Some of them were mean. They used my illnesses to mock me and put me down so they could feel stronger and better than me the same way my father would do. This kind of  behaviour made my loneliness and isolation complete!

It is that period of my life that inspired this film.

I spent 20 years to work myself out of the situation by using making short films and video-art as therapy: That work can be seen on my webpage - www.BrujoArt.com 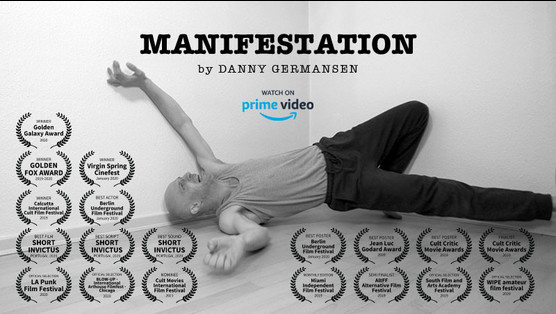