LESSONS LIVED is a story about a grandmothers search for understanding from the imprisoned killer of her grandson Jamison. Bertha suffers from an inner conflict between her religious beliefs of forgiveness and revenge.

The film is a dramatic portrait of loss of life as a result of gun violence. It portrays a slice of society that has lost it’s morality by senseless acts of violence. Bertha and her sister Uma look towards the past to reclaim the present in hopes of a better future. It is in this journey that the characters look into their own lives and see the wrongs they have committed against others, and themselves that present the opportunity to see that forgiveness is the only option for a peaceful and tranquil life.

A boy of mixed Black and White races in predominantly Black and Hispanic Richmond, California, as a nine-year old I faced a pivotal moment that revealed, at once, a strong trait of will and gave birth to an indomitable moral determination to influence social change. Through the compelling tools of narrative and the visual power of documentary film, I re-live that child’s experience now as a filmmaker: shaking with unutterable fear, poised on the edge of a two-story high gymnasium roof, swiping away sweat and tears from my eyes and faced with a bitter choice—leap, or be thrown. Forced onto the roof by a taunting group of students who were closing in to hurl me to the ground two stories below, I chose to leap. I have been leaping ever since. Although I landed on the ground that day, in an agony of shattered bones, I knew thereafter my power both to act and to face the challenge of transforming “the way things are.” Having walked the perilous line between black and white from birth, I have a fairly unique perspective on the world; I understood how it feels to wonder why few, if any, on television or film looked like me. Over the succeeding decades, I have witnessed change, and while I now recognize myself in the representations on screen as, quantitatively, persons of color and non-traditional sexual orientation have become more visible, the representations on the whole did not take the leap of transformative imaging that will propel human perception to a new level. This is where I see myself making a difference; this is where my determination to create transformational film stems from. The ground upon which I leap is that unyielding, yet impressionable platform that is social consciousness. My interest lies in stimulating social change that transcends the prevalent human condition through the depiction of visual elements that touch the soul and provoke the viewer to deeper thought. My return to academics, and specifically film, resulted from a complete loss of material possessions in hurricane Katrina when I became disabled. At that time, disillusioned by the lack of empathy in a society more concerned with commodities than with social wellbeing, I vowed to become an activist for social change through filmmaking. I am grateful not only to be a survivor of the challenging events that have shaped my life, but I am proud that in the face of extreme difficulty, I have always leaped into the future with a determination to change what I can, the best way I can. While I am proud of my cultural heritage, sexual orientation and all that I will be able to contribute in the future as a creative artist, I am committed to lifelong learning and social activism. These ideologies will surface through my visual storytelling, stimulating of thought, emotion and, I hope, a strong desire to facilitate and support the change needed to transform American society in a time of shifting awareness and defiant hope.

I began my academic career at the University of California, Berkeley in Film and Theatre Performance Studies and graduated with dual degrees. Berkeley is a research institution and provided me a foundation in the great literary works of Aristotle, Shakespeare and George Bernard Shaw to name a few. In film it presented me the opportunity to critique Sergei Eisenstein, Akira Kurosawa and John Ford among others. After my foundation was laid I embarked on the production aspect at the University of Southern California MFA graduate program in Cinematic Arts. The coursework at USC has given me the tools in writing, producing and directing, and now I am in my third, and final year where I’ve had the fortune of creating films that will support my continued pathway in the entertainment industry. As my final film at USC I have taken a subject that I think we can all understand, forgiveness and revenge. While I am aware that I will utilize an extreme circumstance in the imagery of forgiveness, it will serve well as the conduit for our own mistakes in life. And I for one have committed wrongful acts against others and myself, we all have. I have seen a world change from acceptance and responsibility for one’s actions, to one of an immoral and unethical behavior as the norm. In fact it was a young man that stole my phone and put a gun to my face that provided the fabric for this story. I felt guilt as he was arrested, I was watching a young black child go into the system of no return. This is why this story is so important to me, and why I want to make LESSONS LIVED as my thesis film. It was Hellen Keller that said, ”Life is a successions of lessons which must be lived to be understood,” and I hope I can transfer that statement into a visual portrait that moves just one person back from this norm we find ourselves. 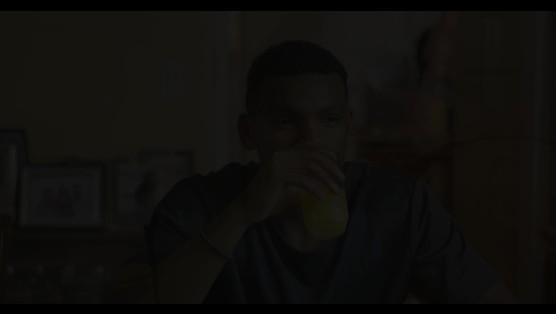