An active violinist and composer, Edwin Huizinga has toured internationally with many of the leading modern classical ensembles around the world (including Tafelmusik Baroque Orchestra, the Knights NYC, A Far Cry, and the Wallfisch Ensemble), and has performed at such esteemed venues as Carnegie Hall, Wigmore Hall, the Forbidden city, and the Petronas Towers. Edwin has shared the stage with the likes of Yo Yo Ma, Itsaak Perlman, and Stevie Wonder, and is the newly-announced Artistic Director of the SweetWater Music Festival (beginning in 2020.)

William Coulter is a Grammy-Award winning guitarist who explores the worlds of classical and traditional music with deep passion and a life long commitment to the highest levels of music making. Collaborations have included numerous tours and recordings with classical guitar virtuoso Benjamin Verdery, Happy Here, Time to Sail and Westward (with Kerry-born Irish singer Eilis Kennedy), and Simple Gifts – Music of the Shakers with cellist Barry Phillips. He has toured internationally in Taiwan, New Zealand, Ireland, Canada, and throughout America, and has earned critical acclaim through his numerous recordings of his solo and collaborative work on Windham Hill Records, Gourd Music and several others.

Together as the duo Fire & Grace, Edwin and William are crafting unique and exciting arrangements of Baroque, traditional, and World Music from around the globe. Their debut duo recording features "the Liquid Gold Suite", a collection of eight movements of music that move gracefully between Baroque compositions by J.S. Bach and traditional Irish dance music.

After becoming an instant sensation in their engaging live performances, this suite of music became the inspiration for the film "Fire & Grace in Ireland." A compelling sonic and visual journey highlighting the people, places, and culture of County Kerry, the film sets cinematic landscapes and artful "micro-biopics" with stunning live performances of the duo in the ancient abbeys, intimate pubs, historic cathedrals and some of County Kerry's most majestic coastal settings.

With the help of filmmaker Andy Zenczak and an amazing team of County Kerry locals, the group captured riveting live performances of  each of the eight movements of "The Liquid Gold Suite" in eight different venues, each contributing to a unique visual and sonic film experience to complement each movement in the suite.

Along the way, the team connected with several artists and modern craftspeople living and working in County Kerry, allowing a more intimate glimpse of the people dedicating their lives to their passion and seizing the opportunity to collaborate with the duo to make the film a transcendent look at the some of Ireland 's rich history and culture.

From the breathtaking scenery, history, and culture deeply rooted in these amazing lands to the incredible artistry of the people met along the way, County Kerry proved to be the perfect backdrop to this once-in-a-lifetime journey into the music of Bach and the music of Ireland.

Director and filmmaker Andy Zenczak is fortunate to live a life steeped deeply in many creative pursuits. An active musician, producer, recording and mix engineer, Andy founded Gadgetbox Studios in Santa Cruz, CA in the year 2000 to help produce and educate up and coming artists in the art of recording. After producing and mixing over 2000 songs and having his work heard on TV, film and radio internationally, Andy began a love affair with filmmaking and visual storytelling, capturing the voice, passion and vision of the artists he had become intimately familiar with in a new medium.

"As many creative projects do, the story of "Fire and Grace in Ireland" started in quite a hurry. Guitarist Bill Coulter called and asked if I would have interest and availability to accompany Fire & Grace on a short tour of Ireland, After a voracious, "YES!!!", he broke it to me that they were leaving in three weeks....

Although three weeks generally is not a lot of time to spend conceptualizing, planning, and preparing for a filmmaking adventure abroad, I was graced with the acquaintance of Jim Twomey, a gentlemen from the county of Kerry, Ireland who recognized the 'dreamer' in me from thousands of miles away. With his enduring friendship, effort, energy and support, I was able to successfully follow Bill and Edwin throughout County Kerry while weaving in the 'microstories' of the wonderful artisans and craftspeople we met through Jim Twomey's gift of conversation, wonder, and belief that "anything is possible.... all of the time."

As a lifelong lover of the Irish Culture and a deep music fanatic from my very roots, this project could not have been a more accurate bullseye of my love of both music and film. We all have deep gratitude to the supporters and Indiegogo campaign contributors who believed in us and made this entire project possible from the onset. I would be surprised if anyone could love watching it as much as we loved making it, but my hope is that the joy and wonder we shared in the making of this film help open ears and eyes to the power of dreaming - and remembering that "everything is possible.... all of the time." 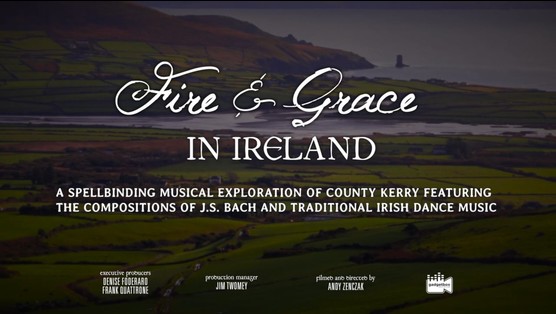