In this modern world, two quirky youngsters find themselves caught up in the web. Could a chance encounter open their eyes to reality or will they continue to live their lives behind rose tinted glasses?

Director & Producer: Cristo Fernández is a Mexican Actor & Filmmaker from Guadalajara, Jalisco. He holds a degree in communications from the Universidad del Valle de Atemajac (UNIVA) in Guadalajara, Mexico & a Master's degree in Acting from the Guildford School of Acting at the University of Surrey in England, UK. In 2017, he delveloped his film company “Espectro MX Films”. Within this company he has released several short films that have screened internationally in film festivals all over the world, in Mexico, USA, India, Argentina, England, Italy, Spain, Albania, Macedonia and Australia. His most successful film to date is his debut film entitled Fuera de Serie (2017), also in pre production as a feature film and winner of "Best Production and Best Short Film Direction" at the “Premios Latino 2018” awards ceremony in Marbella, Spain.

Producer: Kelsie McDonald is an Australian Actress and first time Filmmaker. She trained at the Atlantic Acting School, New York and holds a Master's degree from the Guildford School of Acting, London, UK. Her work as an Actor/Filmmaker has excelled in projects throughout the UK, US, Mexico and Australia. Since the production period of TraducLations, Kelsie has gone onto develop herself as a Writer/Producer & Production Designer, taking part in Mexico's 48 Hour Film Project, Producing and Art Directing on 'Tu Vestido Rosa', 'Distract-Meme'. And most recently Production Designed UK feature film "Creatures" for cinema release Christmas 2020. She is currently in development for a couple of exciting new film projects.

Look around you. How many people can you see, heads buried in their phones? You're probably one of them right now, reading this statement.

Technology is our new age solution of seeking, securing and maintaining connections...and yet...never before have we felt so disconnected.

Distract-MEME is a quirky micro-film that points a finger at the ridiculousness of this generations phone addiction we're ALL guilty of. Cheekily probing the audience to, perhaps, re-evaluate their priorities. 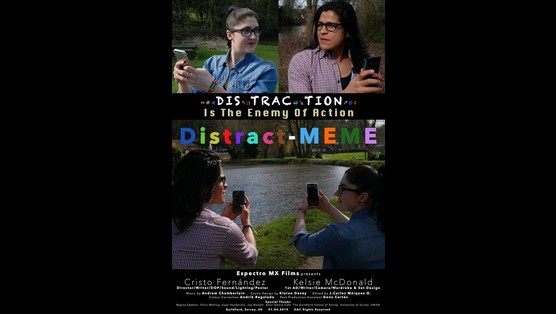