Chavismo: The Plague of the 21st Century

The documentary ¨Chavismo: the plague of the XXI century¨ doesn´t chase profit, it was sponsored by the human rights foundation Humano y Libre and it just looks to enforce consciousness about the terrible drama of which Venezuela has suffer in the period led by the Chavista regime. It was directed and produced by the Venezuelan-Mexican writer and activist, Gustavo Tovar Arroyo, who has personally lived the threats and persecution by the Venezuelan tyranny. The intent is to show in 90 minutes the tragic history of the legacy of commander Hugo Chavez Frias.

In order to command the realization of this documentary of historic cut a variety of politicians, intellectuals and social activists widely reconized throught out hispanoamerica were summoned. Among many others, personalities such as Mario Vargas Llosa, Sebastian Piñera, Luis Almagro, Oscar Arias, Felipe Gonzalez, Vicente Fox, etcetera; Venezuelans who once belonged to the Chavez administration, like his minister of defense Raul Salazar or the president of the state owned oil refiniery PDVSA Guaicaipuro Lameda; and Venezuelan activists like; Lilian Tintori, Mitzy Capriles, Maria Corina Machado, Yon Goicoechea, Daniel Ceballos, among others were interviewed.

Chavismo: the plague of the XXI century it counted with the special participation of the awarded Venezuelan pianist Gabriela Montero, who made original piano compositions for the soundtrack of which maestro Jorge Aguilar was in charge. The main theme of the documentary "Nuestra Libertad" was composed by Venezuelan singer-songwriter Eva Rivera and is inspired by a poem by director Gustavo Tovar Arroyo.

Part of the general production of Chavismo: the plague of the XXI century are the recognized Venezuelan filmmakers and documentalists Jairo Blanco, Manuel Pérez Matos, Vladimir Sosnowski and Freya Mendoza.

Gustavo Tovar Arroyo is a writer, Human Rights activist, documentarian and poet of Mexican and Venezuelan descent who waved the flag of peace in Venezuela since 2002. His civil activism and incisive opinion articles made him one of the most harassed Venezuelans during Chavez’s regime. Due to persecution, property seizing and the incarceration of his partners, he went into exile with his family, where he has continued his fight for the freedom of Venezuela. “Chavismo: The Plague of the 21st Century” is his first documentary.

The Director aspires to “create awareness of the unspeakable horrors that happen in Venezuela under the tyranny of Chavismo”. 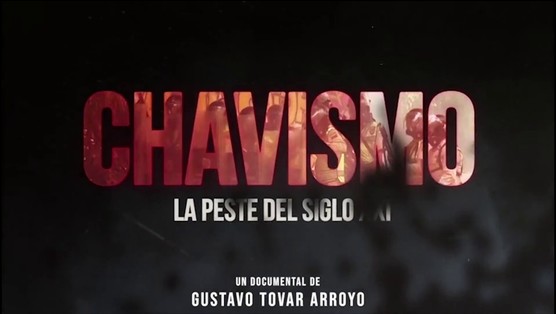