A Room With A View

A woman's life falls apart after she is diagnosed with young-onset Parkinson's disease. Along the way she gains insights and life advice from her brother, her therapist, and an unlikely source: real-life people with Parkinson's.

Nick Pernisco was born and raised in Santa Monica, California, surrounded by the film industry. So it is no wonder then that he eventually decided to major in film in college, and later obtain a master's degree in screenwriting before founding his own company, Carmelina Films. In his first few years out of college, Nick produced documentaries, television programs, and educational videos before retiring from film in 2011 due to being diagnosed with Parkinson's disease and the disability that followed.

In 2018, Nick had deep brain stimulation surgery to help alleviate many of the motor symptoms of Parkinson's. Having brain surgery has given him a new lease on life, so in 2019 he decided to come out of retirement to produce meaningful fiction films in the various cities he has liven in over the years, including Amsterdam, New York, Seattle, and of course, Los Angeles.

His first film in a decade was a short entitled Love Letter (2021), in which he briefly illustrates the battle with addiction. A longer short, Recycled Love followed in the summer of 2022, and the even longer short film, A Room With A View (2022), which is the film he says he was born to make.

I was once told by a friend, "there are easier ways to earn a living than in film. You should have something to say if you want to be a filmmaker." I believe that A Room With A View is that film, with a lot to say about a misunderstood illness.

Since I was diagnosed with Parkinson's disease in 2011 at the age of 33, I have become an advocate for others with the disease, especially for those struck with the even rarer young-onset version, which leaves the patient disabled in the peak of their lives. Many don't understand the plight of the young-onset person with Parkinson's.

When I was diagnosed, I felt my world crumbling. I was confused, angry, and afraid of the future. I have since written several books for people with Parkinson's and created a community for others with this illness. All of this advocacy has in turn helped me on my own journey.

My film is based on my first book, Parkinson's Warrior, which is my story of first getting diagnosed and the emotional turmoil that followed. I finally have something to say, and my hope is that the result entertains as much as it informs. 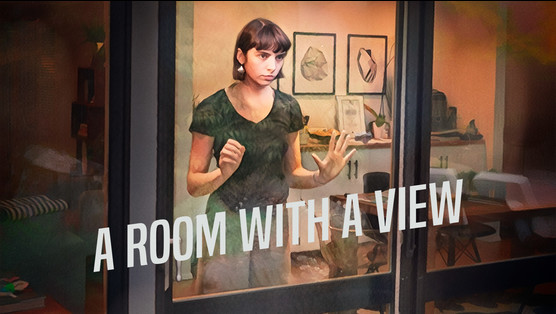