AR3NA is an experimental visual study. AR3NA is antimatter. Inside a world that is empty. Inside a universe that is limitless.

Jordy Veenstra (1993) is an experimental filmmaker, machinimator and post-production professional based in Amsterdam. Starting with Photography, binge watching 'Back To The Future' and creating home video's at an early age, Veenstra moved on to machinima in early 2007 after discovering videogames such as 'The Sims 2', 'Garry's Mod' and 'Quake III Arena' and understanding their potential for expressive cinematic storytelling. His first so-called weekend-projects served primarily as personal assignments to improve his creative insight. Many of these, alongside tutorials, gameplays, reviews and short skits were uploaded to a YouTube channel called 'maximummovies' (2006-2010), which in its prime reached thousands of subscribers and viewers.

Veenstra combined photography and machinima during his studies at the School for Performing Arts in Groningen and graduated in 2013. His experimental style was slowly but firmly established at the University of the Arts in Utrecht, in which Veenstra graduated in 2018 as an autonomous experimental filmmaker.

To date, Veenstra's work has been featured in film festivals, game art exhibitions and machinima festivals in numerous countries, such as the Netherlands, Italy, the United Kingdom and Russia. Besides his fulltime dedication to art, Veenstra works as a Video-Editor, Motion Graphics Designer and Animator in a Creative Agency in Amsterdam and is a part-time entrepreneur in his post-production studio: ARCTIC LIME AudioVisual. In the little spare time he has left he is currently working on his first book, which focuses on his own framework for the cinematic enhancement of machinima films, called 'the practice of distortion'.

ARENA is a visual study about Quake III Arena; its environments and its textures; and a deeper critical look at over two-hundred maps that many of us seemed to have spent many hours in, only to fight, frag, score and humiliate. The map as a 'being' is indispensably linked to the notions of gameplay and therefore also skill. The map itself is the outside layer of an onion, serving as the aesthetic layer for all of the nail-biting and nerve-wrecking last-moment capture the flag scores and all of the digital bloodshed that takes place within this vast universe where only the strongest of them all rule.

ARENA is antimatter; rejecting skill and traditional means of gameplay. No power-ups, weapons and/or players are found. It is you, your inner thoughts and the arena, inside a world that is empty, inside a universe that is limitless. The rest is up to you. 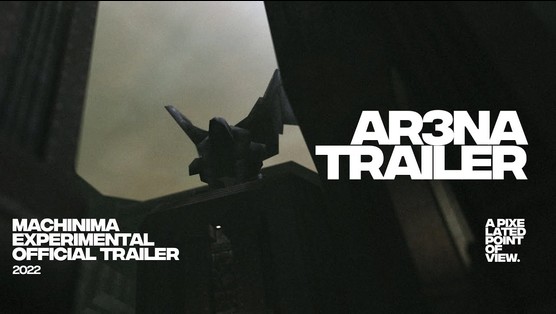