A Castle in Spain

A few months after a painful loss, lonely photographer Carlota Cortés fails to complete a commission documenting castles in the Spanish countryside. Despite the passage of time, she has remained obsessed with “her man”. She is especially haunted by the memory of one “Tina Tickey”, a mysterious and erotic woman of whom he often spoke. Who was she?
During her trip through the barren Bardenas Reales Desert, Carlota’s mental distress grows, and she gradually gets lost in her thoughts, musing about the vital need to take photos, the ideas of property and the nature of matter. These at times humorous reflections lead her to observe the rocks, sand and dust of the desert where she finds symbolic figures of “her man” in the contours of the landscape.
Her overheated imagination then develops a hypothesis: could the shapeless “magma” which permeates the imagery – an entity as indestructible as the memory of the flesh – bring back from the depths of the universe the very atoms and voice of her departed lover?
By chance, the beginning of an answer appears when she finally meets the real “Tina Tickey”.

After obtaining an Engineering degree in 1991, Max Belmessieri was hired by an electronics firm. During his tenure there he developed the “export” range of terrestrial television transmitters, allowing himself time to travel abroad, particularly in Africa.

In 1995, he launched his career in cinema, assumed the mantle of assistant director, and collaborated in particular on films by Francis Girod. During this time he frequently participated in scouting natural settings for films. From 2008, he became a location scout and honed his critical process toward the film set. To date he has collaborated on more than eighty productions for feature films and television series.

At the same time, he has written several screenplays, including “La Peau de l’Autre” (The Other’s Skin), his first feature-length screenplay and based on the murder of Rwandan President Juvénal Habyarimana which led to the genocide of the Tutsis.

Since 2016, he has been teaching location scouting in a high-level film school. With his students, he developed an innovative concept: the “five dramatic springs” of movie sets.

From 2018, he has been working with screenwriter Nicolas Barbey on the rewrite of a feature film entitled “Rewind”, which tells the story of a young woman who discovers a silvery ghost in her wedding video.

Between 2016 and 2020, every summer, he shoots in Super-8 with his wife Charlotte Denis. The major experimentation with these films is that they have no story at the time of filming, their eventual script being dictated by the footage at the time of editing. We could define this unique genre as “self-found footage”. The first film in a trilogy of this type is entitled “Un Castillo en España” (A Castle in Spain), and was completed in April of 2021. The following two films, “El Viaje” (The Trip) and “Una Nube” (A Cloud) are in post-production.

In 2021, he completed the last version of “Personne Ici” (Nobody Here), a short 35mm film and his very first solo production.

A CASTLE IN SPAIN – Director’s Statement by Max Belmessieri
This film will look to be fiction but, assuredly, it is experimental. Let me explain:
During the summer of 2016, my wife Charlotte and I decided to travel from Collioure in southern France to Teruel in Aragon, driving as little as possible the paved roads to favor the trans-Pyrenean tracks and trails. During this trip, I improvised filming in Super-8 color, depending on mood and environment. These silent and irreplaceable images, with neither character nor story, were nothing more than holiday stuff. I kept a written record of my thought and feelings in a black notebook.
When we returned to France, I developed the footage, but unfortunately, an entire coil of film stock stuck in the chemicals and thus did not develop properly. Only 20% of the images were visible, a sort of “fireworks display” into the celluloid. The reels seemed unusable, but I made a telecine at an independent lab anyway. For four years, these images remained asleep on a hard drive and my notes forgotten in the black notebook.
And then…
During the confinement of March 2020, an idea gestated: to edit the film in the order in which it was shot, cutting as little as possible in order to include all the errors and accidents – even the damaged footage – to see if this had a link with the notes in the black notebook. At this stage, there was still no movie character. I noticed in the developed footage of the Bardenas Reales Desert that where Charlotte had taken a lot of photos, I had filmed rocks and sand and dust. The idea grew.
From there I began to imagine a fictional character played – without her knowledge – by Charlotte. This character tells herself stories with what she observes, reinterpreting their meaning until she perceives the “magma of the images”, as she puts it. I started working as if this was “found footage” with no sound, trying to find meaning through the editing. Then I added subtitles to give context. This implied that the character spoke in a foreign language. Thus was born the character of Carlotta Cortés.
The experiment is twofold: can we derive a story through the process of editing simple holiday film images? Without having sought any meaning when shooting, can the links between the images, despite all the accidents – and perhaps thanks to them – conceal my deepest obsessions: the loss of a loved one and the link between minds? Beyond death, can life still swarm between images?
Fin. 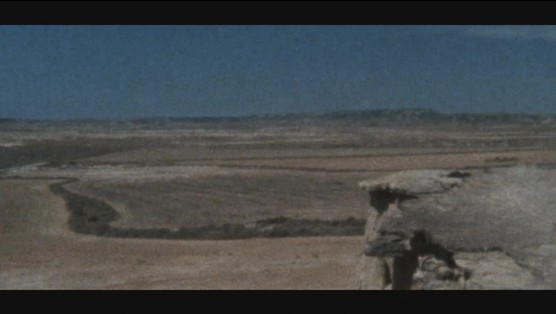