Pigheaded tells the provocative life story of underground cartoonist and subversive satirist Skip Williamson. His unapologetic art exemplified the spirit of the 60s counter-culture movement. Williamson helped lead the burgeoning Underground Comix scene five decades ago as a founder of Bijou Funnies, one of the earliest and longest running titles of that Movement. From his involvement in the infamous 1968 Democratic National Convention riots to his oft offensive work in Playboy, High Times, National Lampoon and many more. Williamson has collaborated with such notable characters as Abbie Hoffman, Robert Crumb, Jerry Rubin, Shel Silverstein, S. Clay Wilson and Jay Lynch. Pigheaded faithfully portrays Williamson’s life as rebellious artist, irreverent pighead and loving family man. Told through candid interviews, animation and archival photographs, Pigheaded takes you back in time to see the behind the scenes of one of America's most curious art movements.

John Kinhart is an artist, director, editor, and cinematographer who studied fine art and filmmaking at the Maryland Institute College of Art, where he received his Bachelor’s Degree in Fine Art in 2001.

An award-winning documentary filmmaker, Kinhart’s first feature film, Blood, Boobs & Beast, has shown at 22 film festivals domestically and internationally, won 6 best documentary awards, received an Underground Film of the Year award in 2007 and was released on DVD in 2009.

In 2010, Kinhart collaborated with Steven Greenstreet co-editing 8: The Mormon Proposition, which premiered at the 2010 Sundance Film Festival. Later that year, he and Greenstreet collaborated again editing a special feature for the DVD/Blu-Ray of Davis Guggenheim’s Waiting for ‘Superman’. In 2011, Steven Greenstreet once again recruited Kinhart for a project he was co-producing with Lagan Sebert: shooting documentary footage of singer, songwriter Ke$ha. The footage was used for the MTV docu-series, Ke$ha: My Crazy Beautiful Life, which premiered in April 2013.

In 2012, Kinhart edited the documentary On Your Mark, Get Set, MOW!, which profiles the lives of lawnmower racers. Mark Bell at FilmThreat.com called On Your Mark, Get Set, MOW!, “a blast to watch!” Kinhart also regularly works for campaigns and progressive causes, including marriage equality, women’s health and environmental protection. He is currently working on a documentary about one of the pioneering members of the underground comix movement, Skip Williamson. 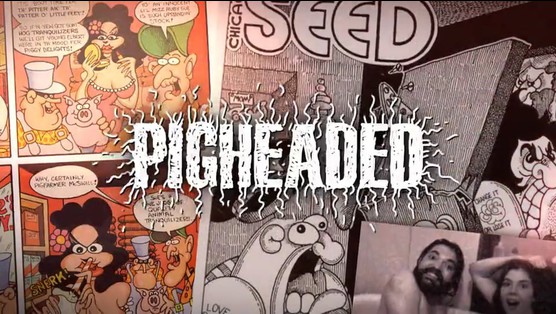