Following in the footsteps of acclaimed, indie, found-footage, big screen treatments (think "Blair Witch," "Unfriended," and "Paranormal Activity") comes the parody short "Blanche's Bichon Buzz." Buzzworthy Bichon Frise' Blanche DuBois Sharp accidentally unleashes her bladder on the pristine floor of Grandma's house. In order to escape her soap-and-watery fate, Blanche must outrun her pursuers. Her journey proves to be an authentic, cinematic, epic nail-biter . . . and possible head scratcher. However, the best cinema is that which makes one think . . . about adorable animals!

Isabella Caroline Sharp is 14 years old and lives in Houston, Texas with her sister Sophia, her mom Gladys, her dad Jeffrey, and her dog Koby. Despite her age, she is a filmmaking veteran who churns out many web shorts per week. Her production company is IssySharpRadio. Besides film, TV, and web video, Isabella is fascinated with the wicked stage and has appeared as a performer in productions of "Mary Poppins," "Mulan" and "Alice in Wonderland." When she grows up, she wants to be an internationally famous and successful pop star, actor, and entrepreneur, just like her idol Selena Gomez. 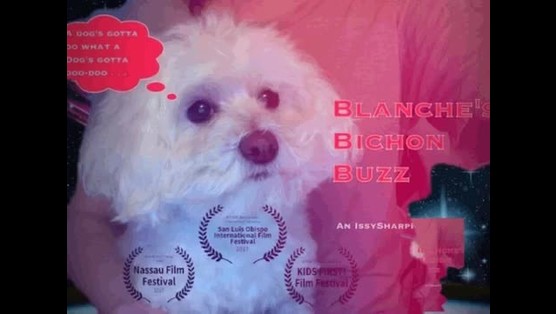