Damn New York, is a letter-film based on the travel diaries of a painter during his stay in the city in 2012. His voice runs over an atypical Manhattan; a puzzle of interlocking neighbourhoods and people that belies the mirage of a city and its hypnosis, its disenchantment, the hidden face of its luminescence. An unlove story letter, far from postcards, a reflection of ambition. Damn New York could be the portrait of a disappointment, a city myth that slowly devours its inhabitants and requires them, a devilish contract that exhaust all its energies. Portrait of newyorkers and not its occasional tourist, those wills running after a desperate ambition. Succeed or survive. A trip to a harsh winter, not its low temperatures but the one you could suffer through its inhospitable cold citizens. New York is not what it was decades ago; their creativity and strength agonize

He wrote and directed the following short films:

Shown during three weeks in Verdi
movie Theatre in Madrid.

Synopsis:
If no one believes in God why we celebrate
Christmas?
Christmas Eve 2001. People do not believe in God.
Not want to hear about him or his son Jesus
Christ. What sense have being together at
Christmas? What are we celebrating? Responsible
for all quoted me at the Palace Hotel on the
morning of that Christmas.

A young student arrives to bouffet of a
university where she match with a
strange Moroccan. This seems to ignore
Western manners to steal her food.
Surprised, she will attempt to educate
him by the example of share. But reality
always strikes. Sometimes, even twice.
You are never too tolerant. There is
always someone more tolerant willing to
prove it.

Dedicated to all the immigrants who builts the progress and welfare of Spain.

Won The Second Prize of CineExplora Toyota Yaris, with a 9,000€ grant to study in The European Film School of Denmark, premiered at the Ideal Multiplex Theatres for a month in all rooms Cineplex of Spain and selected in various international competitions.

A promise of happiness emerges slowly. As slick
as the surface of water in a pond, Hanna and
Piset are opened as two lotuses in Angkor Wat,
Cambodia.
A sacred love?
A profane love?
Twins.

Synopsis:
Human, too Human is a shortcut invoking
Nietzschean free spirit through a body of
provocation. The Venus of Crete; a body of
beauty within a philosophical body walking
around Crete island in healthy tension.
Together nurtured in freedom, nudity and
boldness. A fantasy and a tribute to Friedrich
Nietzsche and Lou Andreas Salomé.

3 lights. A Letter to the politicians, talk about
what we are as social body directly responsible
for the political power, which is not
disassociated from us but deeply connected. We
are all them in a way. Many of us would steal a
mobile-phone, just found on the street, and
many of us piss in doorways outside. That is our
political and social modus operandi from root,
but with less power. It's just a matter of
opportunity to bring out a greater capacity for
corruption. But Spanish is unreflective. This
movie is a letter from a potential emigrant, a
piece for everyone. 3 lights represent three
enlighted archetypes of a desperate Spain, a
mystical angry, dejected and lucid: Javier. A
sceptical survivor, and is placed on the role of a
mother despite being single, and her brilliant
analysis of our lack of responsibility. And finally a
fool, whom from a bathroom explains what a
politician should be.

In a continuous observation of everyday life in
the sea of the Gulf of Thailand, on the island of
Koh Chang, a calendar of miracles is happening
at the edge of a beach and are registered as mini
stories, a visual massage or a set of dances of
the nature.
In this string of small wonders, the camera as a
cinéma-oeile is following the strange beings that
the sea brings us from the hand of composers
such as Debussy, Cage, Bartok and Ligeti.
Not only tourists from Siberia come to these
waters or sellers of coco-sculptures, but also
water nymphs, jellyfish, beautiful insects and
strange sea creatures that inhabit the beaches of
Southeast Asia.
It all starts with the deafening sound of crickets
in the Cambodian jungle, in Angkor Wat, and
ends in Mahahual with a strange character in the
Mexican Caribbean beaches, where giant cruise
ships dock at its port with a beautiful lighthouse.

As director of feature films, he has produced and directed the
documentary essay on the terrorist attack in Madrid on March 11, 2004.

The major attack that our country has
experienced, the fateful March 11, and the
social and political turmoil that resulted in
the following days serve as an argument for
a documentary that tries to find causes and
consequences of what happened. The story
goes back to the beginning of the Iraq war
and the controversial meeting of the Azores,
to try to explain why Spain became the
target of Islamist terrorism, and how the
government handled the tragedy before the
election. "Boomerang 11M" is a documentary
complaint directly inspired by the movie
"Redacted" by Brian de Palma. Its director,
Arturo Prins, recognizes that after it felt he
had to do something similar in Spain, with
the terrible attack of the 11M line and
management of the tragedy by the
government. To discuss the causes and
consequences of what happened, we go
back to the beginning of the Iraq war and
supported the controversial Bush-Aznar
government, in addition to comparing the
conflict with Vietnam fiasco.

Matias is a consul doomed to their daily work
in foreign ministries and embassies around
the world. Deeply he hates his job, except for
his salary, with which he can financially
support his family and have a state of
comfortable and safe life. But behind this
monotonous life, a vocation that fails to
deliver hides. Through his visits to London,
New York and Thailand with an artist friend,
you will discover his talent for painting and
their appetite for being an artist. However,
this call can be turned off at any time.

“Unde the banyan tree” is a documentary exploring the inner world, memories and experiences of a 103-year-old Philippine woman, Nana Jessie. The life of a woman who at 18 Left her birthplace in Cuba, to travel across land and ocean all by herself, to meet her future husband, Marcial Lichauco, in Manila. This is the portrait of a life full of adventure and unusual situations, embracing from before World War II to the present day. A house
packed with old books, antiques, exotic objects, stuffed wild animals, photo albums, cats, dogs and a huge two hundred year old banyan tree next to the Pasig River, will be the supporting actors at the background of her memories. Through them and a clownish historical guide named Carlos, we will discover the history of a country, the traces of the Spanish and North American colonization, as well as the violent Japanese invasion during World War II.

Damn New York, is a letter-film based on the
travel diaries of a painter during his stay in the
city in 2012. His voiceover runs an atypical
Manhattan; a puzzle of interlocking
neighbourhoods and people that belies the
mirage of a city and its hypnosis, its
disenchantment, the hidden face of its
luminescence, the hidden side of New. An unlove
story letter, far from postcards, a reflection of
ambition.
Damn New York could be the portrait of a
disappointment, a city myth that slowly devours
its inhabitants and requires them, dazzled by the
lights, a devilish contract that exhaust all their
energies. Portrait of newyorkers inhabitants and
not their occasional tourist, those wills running
after a desperate ambition. Succeed or survive.
A trip to a harsh winter, not their low
temperatures but the one you suffer through its
inhospitable cold citizens, dropping the veil of
illusion that this metropolis produces. New York
is not what it was decades ago; their creativity
and strength agonize.

He is the producer and director of short films, feature-length documentaries, and
free-lance director of commercials. He studied with Thomas Vittenberg in the film workshop "Cinexplora TOYOTA". Awarded with a scholarship Prize of Toyota to study in the European Film College of Denmark.

As director of advertising has worked and collaborated in various advertising agencies as an Art Director (Saatchi & Saatchi, Counterpoint, Ruiz Nicoli and Szcena
audiovisual productions) and doing spots for Sara Baras and comedy-musical group Les Luthiers (issued Telemadrid) , among others. 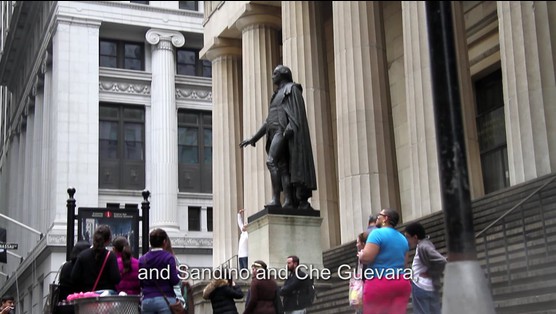