In late 2014, a new wave of refugees coming from war devastated countries in the middle east assailed Europe, creating a continental crisis, that started a heated debate, that shook the foundations of the Schengen area, and strengthened nationalist, euro skepticist and Islamophobic feelings that divided European citizens.

Ironically enough, countries that in the past had many of their natives escaping war and totalitarian regimes, ended up being more critical, with their heads of state or government openly opposing or criticizing the solidarity positions from other EU members, and threatening to close their borders and calling for referendums to leave the Union.

One of these countries was the Czech Republic, one of Europe’s youngest republics, but with a long history of exile, oppression and forced migration.

This film analyzes migration in this country, from the days after the warsaw pact invasion to crush the Prague spring, till the recent Brexit referendum, not only from the point of view of former Czech migrants that seeked for political asylum abroad to escape communism, but also foreigners who found their home and built their life here, making it a very insightful portrait of tolerance, discrimination and multiculturalism in one of Europe’s least cosmopolitan societies.

Emanuele Ruggiero
Freelance Director, 1st assistant Director, Producer, Journalist since 2001, Photographer, Cinematographer and Editor working for 25 years in the Show Biz with great experience in the production of television formats, movies and film productions.
Expert in visual content marketing, directing corporate videos and presentations, institutionals, advertising and viral videos for the web and much more. Lighting cameraman for The Survivors of the Shoah Visual History Foundation Institute by Steven Spielberg. 1st Assistant director in the 90s at the Piccolo Teatro Theatre in Milan with Giorgio Strehler and also in many italian movies. On television, he worked as cameraman and an 1st assistant director in productions such as Aran, Endemol, Rai tv and many others. As a director, filmed and produced many music videos, for famous italian singers.
Working 11 years in the directing crew of the most famous italian national Tv Serial named "100 Vetrine", broadcasted on Mediaset tv (sharing 32%, 5 millions people watching tv every day).
His directorial debut with the short film '' Never so close'' in 2010, obtaining various participations in Short Film Festivals in Italy and abroad, winning several awards."

Antonio Pedro Nobre
Graduated in scriptwriting at ATCAS, Lisbon, Portugal. In 1997 he started working at the TV / Cinema / Radio department of international advertising agency McCann Erickson Portugal. Since 2001 he has worked freelance, as a screenwriter and an assistant director of television programs, television commercials, music videos and corporate films, not only in his native country, but also abroad.
Since 2006 he has been collaborating with QQ studio Ostrava in the post production of national TV programs like "Chalupa je hra" (2006 - 2011), "Pod pokličkou" (2007 - 2011) and more recently "Draci v hrnci" (2013 - present).
In 2007, he began to work as a director, specializing in music videos, and teamed up with artists from around the world like Fernando Saunders and Mike Terrana (US), Ashia and the Bison Rouge (Pol/US), Gergo Borlai (Hun) and Czech Artists like Aleš Brichta, Martin Chodúr, Markéta Konvičková, Elis or Dalibor Mráz among many others. He also made documentaries and promotional videos for music and arts festivals such as the Colours of Ostrava, Setkání kytaristů & spol., Janáčkův Máj, Shakespearovské slavnosti Ostrava, Festival Banát, Ostrava Jazz open and Tanec Ostrava.
He has worked with cultural institutions such as the National Moravian-Silesian Theatre, Janáček’s Philharmonic Orchestra, the Janáček‘s Conservatory and Gymnasium and the multi-genre cultural center Cooltour.
Since 2013 that he is the President of the Jury of the International Outdoor Film Festival, an itinerant event covering over 40 cities in Czech Republic, Slovakia and Russia.
He is also an avid InterRail traveler, authoring 4 guidebooks in the subject and also directed the documentary "40 years on track - the InterRail pass story". 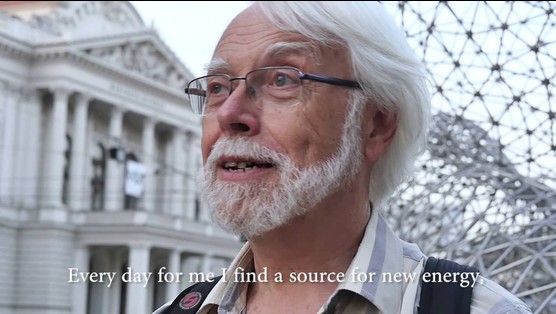