Carmen Lidia Vidu, the first Romanian multimedia theatre director, grew up in Arad, a city at the border of Western Romania. After leaving Arad for Bucharest 15 years ago, she returns and makes a cinematic documentary experiment about the people and places from her childhood. She is the protagonist of a virtual journey throughout time, compressed into one day. The skate park, the flea market, the bicycle ride on a path in the forest, the local church, playing board games with old people in the park. Miss Arad and beauty, her neighbour and best friend Cristi, her father’s auto repair shop, the tram, karate, the theatre, the philharmonic, the mermaid by the pool. Real and surreal moments, part from her memory, part from her imagination, seeing as the adult through the child’s eyes, moments that shaped and contributed to Carmen’s development and career, ARAD. My Virtual Diary is a visual journey and a story about growing up, love and nostalgia.

Profile : Carmen Lidia Vidu
Film, stage and event director, Carmen Lidia Vidu is well known for the experimental theatrical performances staged for the most important theatres in Romania. She is a unique voice on the Romanian stage , being the first director to successfully combine the video projections and the specific means of the film with the actors’ live presence.

She is the first and the most important multimedia theatre director and the youngest theatre director who put on a play at the National Theatre in Bucharest (“The Nightingale and the Rose” by Oscar Wilde, in 2007). She graduated from I.L.Caragiale National University of Theatre and Film in Bucharest, in 2003 but she comes from Arad. The theatrical performances staged by Carmen Lidia Vidu are special as they use a different artistic language and transform technique into genuine feeling, and the director promises that she will never give up experimenting.

Carmen Lidia Vidu has also tried her hand at directing films (documentary and short film) and video clips (collaborations with Noblesse Oblige and Mes Quins bands). “A Short Astra Film History”, directed by Carmen Lidia Vidu and produced in 2013 for the Astra Film Festival held in Sibiu, won the Gopo Award for the best short documentary film in 2015.

Further details about the projects of the director Carmen Lidia Vidu, photo and video materials as well as the full list of her spectacles on the official page of Facebook (https://www.facebook.com/carmenlidiavidu) and on her personal blog (http://carmenvidu.tumblr.com/)

Carmen Lidia Vidu, the first Romanian multimedia theatre director, grew up in Arad, a city at the border of Western Romania. After leaving Arad for Bucharest 15 years ago, she returns and makes a cinematic documentary experiment about the people and places from her childhood. She is the protagonist of a virtual journey throughout time, compressed into one day alternating between reality and fantasy.

The film is dedicated to my parents. I grew up in Arad. I followed education there, I was highly competitive, so busy with being the best in everything, that I forgot to enjoy the city and the little things. Now, 15 years after leaving Arad, the city has settled, and now I am making a virtual narration of all the people and situations that made me become what I am now: my family, the church, the philharmonic, the competition, theatre, beauty contests, clubbing and the love for theatre.

The tone of the film is nostalgic, a bit sad, a bit melodramatic, a bit narcissistic, a bit of fantasy; singular, infantile, anachronistic, ambitious, just like me.

I am a daydreamer and often relax into my own imagination. I remember a documentary about Fellini – I’m a Born Liar, where he famously said: "For me, the things that are the most real are the ones I invented." That documentary inspired me to try my own version of reality.

Arad. My Virtual Diary is like a confession combined with a declaration of love. It’s my confession for how a city can shape a human being’s structure. It’s a declaration of love for my parents. The nostalgic part comes from the fact that as the years passed by, I remembered the young version of me, thinking that as soon as she finishes high school, she will change the world. As the MTV generation, growing up in the American pop-culture, we were under the pressure of the youth, becoming a genius at 23, being at the top at 24, fast and aggressive. I came to Bucharest with this in mind, I sometimes was and sometimes wasn’t at the top. Now I’ve reached maturity. It’s maturity that’s more difficult to deal with, not with childhood or old age.

The virtual diary is the way I perceive reality, it’s my subjective angle and the way people and things settled in my own way. 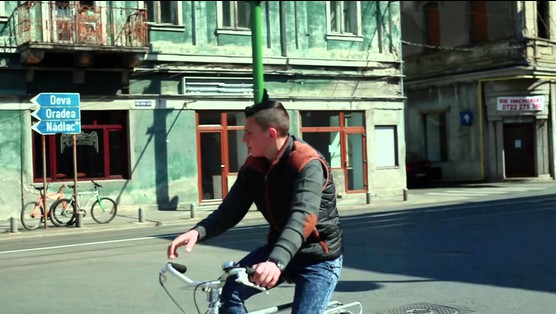