Faaji Agba is a six-year journey by film-maker Remi Vaughan-Richards following seven, 68-85yr old Yoruba master musicians in Lagos, Nigeria. They were forgotten by society, until Kunle Tejuoso, owner of Jazzhole Records, follows a trail to rediscover them and the 'FAAJI AGBA COLLECTIVE is born. Kunle's journey starts with Fatai Rolling Dollar, which leads him to others such as Alaba Pedro, SF Olowookere, Ayinde Bakare and more. Their musical styles range from highlife, juju to afrobeat. The story starts in 2009 and follows them on their journey to perform in New York in 2011 where tragedy strikes. A year later, undeterred by the setback they perform again in Lagos, ends up being their last. Faaji Agba interweaves the history, culture and music scene of Lagos, Nigeria from 1940’s to 2015 as their joys and tragedies unfold

REMI VAUGHAN-RICHARDS is vibrant and versatile director. She studied MA Textile Design at the Royal College of Art, London where she was awarded a distinction for her innovative designs and a Post Graduate Diploma in Film and Television at Kingston University, London. She recently received an award at the Africa Magic Viewers Choice Awards for her documentary 'Faaji Agba' , which premiered in London at the British Film Institute "Beyond Nollywood" 2016 festival. She received an award for her contribution to documentary films in Nigeria. The award winning docu-drama 'One Small Step' (featured in the New York African Film Festival) and 'Scent of the Streets', documentary on Area Girls for BBC featured at Afrikamera, Berlin. As well as the groundbreaking 52 part TV drama 'Wetin Dey' for BBC World Service Trust, Nigeria, Remi created an interactive multi-media project for the launch of the £22m Rich Mix cultural centre, London, which involved film, interactive computers and community participation. Her feature films include: 'The Department', (drama), Inkblot Films; and most recently the documentary feature, Faaji Agba, as well as her latest drama feature, 'Unspoken' for Ford Foundation.

Her career began in 1990 in the Art Department working on films such as ‘Judge Dredd’ (Sylvester Stallone), and Stanley Kubrick’s ‘Eyes Wide Shut’ (Tom Cruise and Nicole Kidman). In 1995 she became a respected storyboard artist, visualizing the action, camera and mood for her clients such as the BBC and 51st State (Samuel L Jackson).

Since 2000 her skills and experience have added an extra dimension to her work as a director. Remi’s mission is to create a slate of cutting edge feature films and documentaries that will focus a sharp lens onto contemporary Africa.

When I first started filming on Faaji Agba in 2009, I had no idea where it would take me. It was finally finished in 2015. I am amazed that I actually finished the film

Faaji Agba has been a passion project for me, a 6 year journey. It was pretty much a one-woman show. I was doing 95% of the filming and we did it on a shoestring budget – Kunle and I would put together whatever we had to make it work, then finally I managed to get financial support from various sources for the post production and trip to New York. I finished it on the morning of the premiere for Lights Camera Africa film festival in Lagos. October 2015.

It was Kunle Tejuoso of Jazzhole Record’s passion for the music and his search for these great Yoruba master musicians that ignited my interest. I would come and film him working with the guys and of course over time – 6years later I got to know them very well to the point where they even forgot there was this “yellow” woman following them around constantly with a camera and headphones attached to her ears. I fell in love with these guys and their stories, their insight into the history of the music and culture of Lagos. When they started dying on me it was very painful because they had become part of my family, like uncles to me and each time I watch the film, I have such incredible memories and feel very privileged that I was part of their world for 6 years.

I have one major problem with the way Lagos and Nigeria is generally going…there is a rush to be ‘western’ and lack of pride in our rich culture. They say you can tell the history of a country through it’s architecture and music. The old Brazilian quarters hardly exist now, it is almost like Nigerians are not proud of their legacy…this is the message I wanted to pass on in Faaji Agba – if we lose our identity, we lose our culture and sense of who we are.

It has been an amazing journey, a moment in time that can never be repeated and I thank Kunle Tejuoso for allowing me to be part of his journey with Faaji Agba.

Faaji Agba is a raw, honest heartfelt film that touched my life deeply. 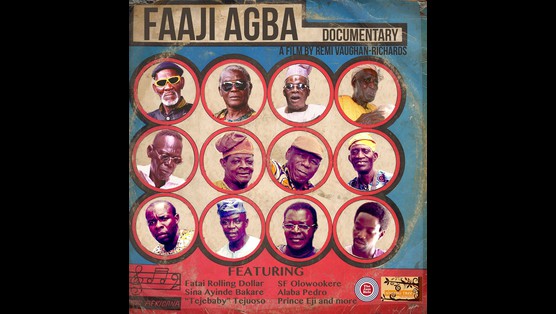