Summer is short film about two teenage girls in a Hasidic sleep-a-way camp who, despite their every effort to maintain their purity, explore a forbidden book which leads them to a sexual awakening neither of them are prepared to encounter. Featuring Thea Mccartan, Juliet Brett, and Emmy Tanzy, the film is shot in situ in the heart of Hasidic Upstate New York.

Pearl Gluck was awarded a 2000 Sundance Producer's Lab fellowship and a 2001 Sundance Festival mentorship for Divan (2004), her first documentary film. "Summer" has been nominated and won awards at various festivals including Best Short at the San Francisco Jewish Film Festival and a Special Jury Award at the Deep in the Heart Film Festival. "The Turn Out" (2018) is her first hybrid feature film and won the Best Debut Feature award at the 16th annual Female Eye Film Festival in Toronto. Divan (2004) was broadcast on the Sundance Channel, theatrically premiered at the Film Forum in New York and played at festivals around the world. Her short film, Where Is Joel Baum (2012), starring Lynn Cohen won various awards at festivals including Best Film at The Female Eye film festival and Best Actor for Luzer Twersky at the Starz Denver Film Festival. Her short film, Junior (2017) addresses racially motivated police violence. Her feature, The Turn Out, explores domestic sex trafficking at truckstops. Her first short film that she co-wrote, Goyta (2007), premiered at Cannes, and she co-directed and co-produced the award-winning short, Great Balls of Fire (2001) which screened at Transmediale, Oberhausen, European Media Arts Festival, Ocularis, the New York Video Festival at the Film Society of Lincoln Center, and the DIG.IT Festival at the Walker Center for the Arts. In 1996 she received a Fulbright grant to Hungary to collect Hasidic stories. Gluck has been interviewed about her work on NPR with Melissa Block, WBUR's The Connection with Chris Leiden in Boston and produced for WBAI. She has appeared in A Life Apart: Hasidism in America (1998; Directed and Produced by Oren Rudavsky and Menachem Daum). Pearl teaches screenwriting and directing at Penn State University.

Summer is short film about two teenage girls in a Hasidic sleep-a-way camp who, despite their every effort to maintain their purity, explore a forbidden book which leads them to a sexual awakening neither of them are prepared to encounter. Featuring Thea Mccartan, Juliet Brett, and Emmy James, the film is shot in situ in the heart of Hasidic Upstate New York. In terms of the writing and directing, I, too, attended an all-girls Hasidic summer camps in the Catskills. I was brought up Hasidic, and when I was in high school, I was the one who found the science books before the principal ripped out the chapters on Reproduction and Evolution. What I saw astounded me and I snuck into the library to uncover more of the censored world: I studied Our Bodies Ourselves like it was one of the five books of Torah without anyone discovering my secret self-awareness and sexual awakening. This is precisely why I was driven to see what may happen if I put the same book into the hands of two teenage girls in a summer camp. Sexual exploration, curiosity, experimentation and self-expression are traditionally marginalized especially for girls in the religious world of my youth. Despite blatant repression or subtle encouragements toward a chaste and non-sexual adolescence, it is inevitable that young women will grapple with the overwhelming and natural desire to explore themselves. How – and if – they break through those barriers interests me. 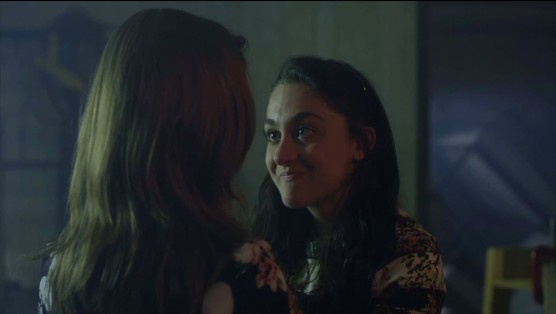