The Road To God

"The Road to God" shows the journey of three siblings, Loga, Bieber and Kajol who are required to fulfill their late father's wish of sprinkling his ashes in a sacred place. On their journey to the Holy Land, there are obstacles they have to overcome.

Although the three often quarrel and show their ego to one another, their goals are still the same. The obstacles faced together on this journey is due to the late father's motive for bringing his lovely children together. Therefore, in order to break the back of the beast, the three of them need the spirit of cooperation. Will they manage to overcome the adversities in their journey and reach their destination safely?

He is an amateur filmmaker and educator in the Department of Performing Arts and Production Technology, Faculty of Applied and Creative Arts, Universiti Malaysia Sarawak. He holds a Bachelor of Cinematography (UNIMAS) and a Masters in Screen Studies at the School of Communication, University of Science, Malaysia. He began his career as a tutor since 2009 and started lecturing in UNIMAS since 2012, soon after he graduated From University of Science, Malaysia. He has been teaching various courses of his interest for example Film Editing, Scriptwriting, and Videography. He excels in the digital video production, documentary, animation and instructional multimedia. He have produced many short films for YouTube contents as well as to film festivals around Asean and recently he received first runner up lecturer award in Youth Video Award 2016, Malaysia. His Latest shortfilm titled "steamfish" has been shortlisted for You Are The One Shortfilm Competition 2016, Malaysia.

I am interested in all forms of media. I believe that by blending different forms of art such as audio, visuals, storytelling, etc. you can create a more powerful piece than by using one art form alone. Each project I make is different, and I've found that each person takes something different out them. Our current culture, and my generation, is prone to listening to video media. I want to
create films that have something positive to say. My recent short film as Cinematographer and Editor entitled "Steam Fish" has been selected for top 12 finalist in You Are The One Short Film Competition 2016, Malaysia. The Road To God is the latest short film was accepted to be screening at Rantai Arts Festival 2016, Malaysia. This is my third time as a director for my short film. I feel honored by the acceptances and i am very excited that the film will reach many audiences and share a story they may not have known before. This short film touched me, It challenged me. I remember it still. I feel passionate for film and the world I live in. My hope is to carry inspiration to others. 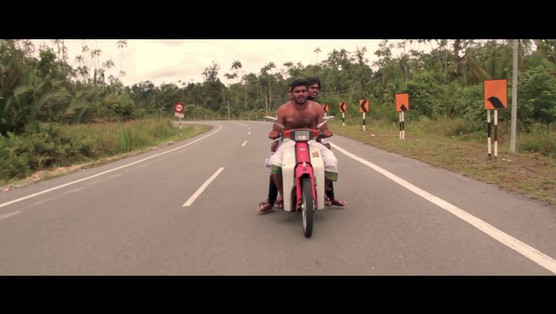