Attempting to better understand her grandfather Avrom Sutzkever, Israeli actress Hadas Kalderon travels to Lithuania, using her grandfather’s diary to trace his early life in Vilna and his survival of the Holocaust. Sutzkever (1913–2010) was an acclaimed Yiddish poet—described by the New York Times as the “greatest poet of the Holocaust”—whose verse drew on his youth in Siberia and Vilna, his spiritual and material resistance during World War II, and his post-war life in the State of Israel. Kalderon, whose native language is Hebrew and must rely on translation of her grandfather’s work, is nevertheless determined to connect with what remains of the poet’s bygone world and confront the personal responsibility of preserving her grandfather’s literary legacy. Woven into the documentary are family home videos, newly recorded interviews, and archival recordings, including Sutzkever’s testimony at the Nuremberg Trial. Recitation of his poetry and personal reflections on resisting Nazi forces as a partisan fighter reveal how Sutzkever tried to make sense of the Holocaust and its aftermath. As Kalderon strives to reconstruct the stories told by her grandfather, the film examines the limits of language, geography, and time.

Emily Felder, Editor and Co-Director
Emily Felder is a documentary film editor whose work has been screened in museums, libraries, and schools across the country. She studied anthropology at the University of Massachusetts, Amherst, where she became invested in archaeology, visual ethnography, and non-fiction storytelling. She worked as the premiere technical assistant for the Yiddish Book Center’s Wexler Oral History Project, and as an assistant editor at Florentine Films/Hott Productions on feature-length documentaries broadcast on PBS. She is now an editor and videographer based in Los Angeles where she continues to make films.

Christa P. Whitney, Producer and Co-Director
Originally from Northern California, Christa discovered Yiddish while studying comparative literature at Smith College. She has studied Yiddish language at the Vilnius Yiddish Institute, the Workmen’s Circle, and the Yiddish Book Center. For the past ten years, she has directed the Yiddish Book Center’s Wexler Oral History Project, traveling near and far recording oral history interviews, managing a video archive, and producing documentary films and web features about all aspects of Yiddish language and culture.

Christa Whitney: It was reading Avrom Sutzkever in my first semester at Smith College that introduced me to the world of Yiddish literature. Back then, I never could have predicted that this interest in Yiddish would lead me on adventures all over the world and eventually to this film. Reading Sutzkever feels like a return to an intellectual and emotional home within Yiddish culture, so working on this film came with intense pressure as well as pleasure. I am not alone in my fascination with this writer and the world of his youth in pre-war Vilna, so it is my hope and honor to share this writer’s wild life story and endless well of inspired poetic work with a wider audience through this, my first feature-length documentary film.

Emily Felder: I was drawn to tell this story not only as a documentary filmmaker but also as a Jewish woman. This film examines the significant testimony of a Holocaust survivor and explores the challenges of intergenerational cultural transmission and the inherited trauma therein. As an American Jew whose family experienced this historical injustice and shares in its collective memory, I am humbled to illuminate Avrom Sutzkever as a key literary figure in the evolution of secular Jewish expression and identity. 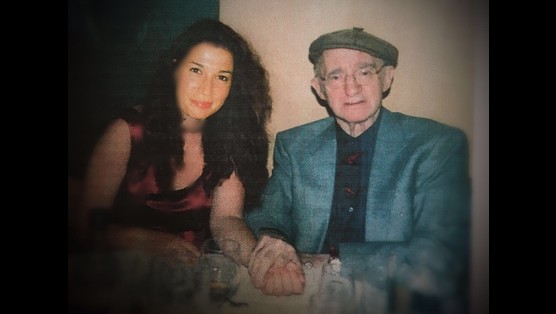