Eight Hindu women and their children are abducted and forced into marriage, to flee to Bangladesh and convert to Islam by the militia group Arakan Rohingya Salvation Army (ARSA). They are again forced by ARSA to make falsified statements to the mainstream media and on social media in Bangladesh. They would find their saviour in the form of young Hindu barber Barbul, who learnt of their true story.

“In this brutal and senseless act, members of ARSA captured scores of Hindu women, men, and children and terrorized them before slaughtering them outside their own villages." - Amnesty International

"They were subjected to various forms of conflict-related sexual violence (CRSV), including forced marriages, and endured other human rights violations including forced (religious) conversions and physical harm at the hands of their captors. Tantamount to crimes against humanity." - LSE Centre for Women, Peace and Security

The Northern Part of Rakhine , Myanmar has endured since 2012 of devastating violence.

Recently, The Gambia brought the case to the ICJ on behalf of an organization of Muslim nations, accusing Myanmar of genocide during its 2017 crackdown on the Rohigya Muslim. Trunocide tells another story of that region.

What drew me to this project was hearing stories from Hindu survivors girls and U Ni Mal, a couple of weeks before we ever started shooting this film. At the time, my wind was blown open by the horror of what I was hearing. These girls had suffered horrific abuses and forced to covert their religion, being witnessed of brutal murdering of their husbands and their family members.

They had in many cases lost everything that was meaningful to them. It was crushing to imagine both what they had been through and how they could go on. But equally arresting was the palpable resilience of these girls. The fact that these girls could find ways to create meaning in their lives after such experiences was awe-inspiring. This is what initially drew me to this story.

One of the things I felt strongly about in the making of Trunocide is that I wanted this film to have its own language, both tonally and structurally. I wasn’t really interested in making a film that was too straight ahead because I had seen films where I felt like I got a lot of information but didn’t really experience anything. I wanted to make a film that allowed audiences to feel what I felt when I first see them – the tremendous worry, harrowing stories, hopeless situation and couldn’t imagine a future of themselves. It was important to me that the audience not go numb in the watching of this film, or to be so torn up that they shut down and stopped listening.

So the balancing between the devastation of what these women had suffered and the incredible force of hope and seek justice that they embodied was something I grappled with a lot. Amnesty International revealed their story but justice has not been served.

To this end, I used all sorts of methods and found myself inventing things along the way. We worked a lot with sound and music to interaction of their feelings. I saw the conflict as a sort of character of its own that we revisit throughout the film, learning bits and pieces each time. I tried to give enough history but not too much, and I questioned myself constantly in this regard. This was a real challenge and I hope an audience finds it satisfying meaning of Trunocide but this lacing elements and tonal shifts were very important to me. 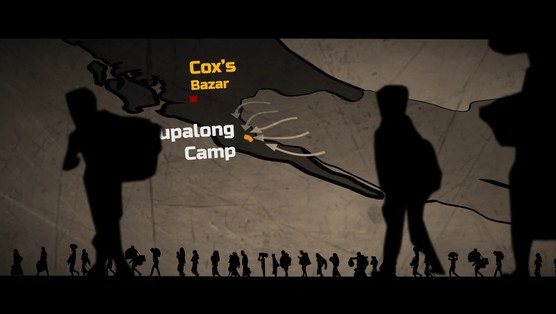