"This is what happens when you aren't taught how to bead." – Gail Cyr

"This is what happens when you aren't taught how to bead." – Gail Cyr

"...On Sept. 20, the longtime Yellowknifers will take the stage at the Northern Arts and Culture Centre (NACC) naccnt.ca/ for the Ko K’e Spoken Word and Music Festival. Their performance will be moderated by Cabin Radio’s Ollie Williams.

Cyr and Wheeler came up with the idea of teaming up for the festival about six months ago, he said.

“I want to hear more of her stories and how she raised me and how I turned out so terribly,” he quipped. “Because I think it’s endlessly interesting to here from someone who has been here for decades about how the town has changed because it’s such a transient town. Most people stay a year, two years, and leave but to plant roots in a place like this difficult, tumultuous and I think it takes a lot of adaptation and skill.”

The pair will recount the fascinating tale of how Cyr extricated herself from the mean streets of Winnipeg to forge an eclectic and successful career in the North...."
– by Ezra Black September 19, 2019
https://nnsl.com/yellowknifer/cyr-and-son-bring-their-story-to-the-stage/

With a background in community access media and media training, I’ve worked in print, broadcast radio and television and in educational media. I consider myself an artist in electronic and digital media.
Born and brought up in Montreal, in Canada, my work has taken me to Toronto, Vancouver, Banff and Calgary; Inuvik, Fort Smith and Yellowknife NWT; Salluit, Nunavik (Arctic Quebec) and Arviat, Nunavut.
I’ve been posted internationally to Beijing, China; Nassau, the Bahamas; La Paz, Bolivia; Butare, Rwanda; Chelyabinsk, Russia; Berhampur, Odisha, India and the Peruvian Amazon.
These days in am in Lethbridge Alberta. 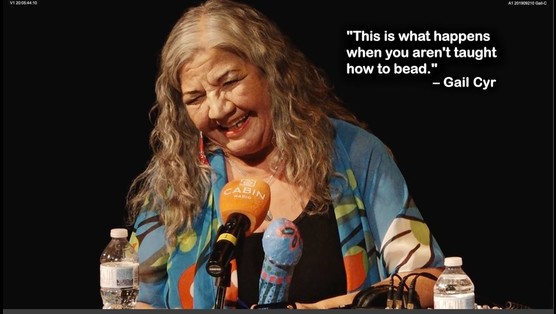