Anand, a job-seeker, stays with his friends Ravi and Balaji, in one house. Anand often listens to some unusual sounds like that of a doorbell repeatedly ringing and banging of door in the house. Sound of vessels falling down, water flowing from the tap, someone whispering etc. This creates in him an impression of some paranormal presence.. Interestingly, his room-mates do not hear these sounds. They find Anand blabbering without any sense. Anand also repeatedly witnesses a lady in Burqa appearing before him and suspects she has got something to do with his sister’s murder in the past. Even this lady in burqa turns an illusion many times to him. He hesitates to go to his house, despite his parents’ repeated pleas. Now, why Anand is reacting to even simple normal sounds so abnormally ? Who is the lady in burqa ? What is her connection in Anand’s sister’s murder ? Will he find a solution to the mysteries behind these unusual sounds he hears ? All these comprises the rest of the story.

Mani Shankar Iyer is a screenwriter and Director from Chennai, Tamil Nadu, India. He completed his Bachelors degree in Commerce from New LJ College of Commerce, Ahmedabad and later did his post-graduate Diploma in Film Technology from MGR Government Film and Television Institute, Chennai. He holds a Gold medal in Direction and Screenplay writing. During his academic career, Mani made various short films like The Chess Champion (English), I am a Gay (Hindi), Maayathirai (Tamil), Azhagana En Charupriya (Tamil), Maargam (Tamil) etc. which were all critically acclaimed and selected at various film festivals. His most critically acclaimed film “Magizhvan” (Tamil) was selected at various international film festivals including Seattle South Asian Film Festival and Kashish Mumbai International Queer Film Festival, bagging several awards. He also takes lectures in film making and screenwriting at various film institutes in India. “Sattham” is his first feature film.

I wanted to tell a thriller story which is more content oriented and narrated in a simple manner. When you watch a lot of horror films, you frequently notice a character walking in the dark, especially during nights, listening to strange sounds and witnessing paranormal activities. The sound plays here a crucial role. The long mise-en-shots, silence in sound develop a fear within us and make us enjoy a feeling of travelling with such characters. I also wanted to try something similar with sounds. I therefore sketched a character, who always listens to some strange sounds. Interestingly, these strange sounds turn unreal.

First, we may feel why this character is behaving abnormally, but slowly when we get carried with the story and character, the frustration of the actor and the core element and why he is experiencing these auditory illusions, comes to limelight.

We planned a lot of things with sound. Sounds which create fear and build ups, we felt, are monotonous and stereo-type. Playing with any kind of horror films, sounds have always been designed in this way. We wanted to be more realistic in our approach, hence, we designed sound that look original and those that we experience in our daily life. The plot turns interesting when we see the character reacting to even normal sound abnormally. The curiosity generated gets a boost.

In Tamil cinema, usually it is difficult to tell a story without incorporating some commercial flips and that too narrated in a slow pace. If you watch a horror film, it goes usually in a slow pace. Only sounds will move further the curiosity of a viewer what would happen next.

Satham creates similar effects, except it is not a horror film. The idea “whether sounds can haunt a person” fascinated me to develop a full length screen play. Once through, the next thought came into my mind why can’t we convert it into a full-fledged film.

The next challenging part of the film was to find a producer. This was very intrinsic as we were newcomers and it was difficult for us to convince the producers commercial viability of the film, as usually Tamil films are hero centric. Many producers expected us to incorporate some commercial elements like comedy, dance, romance, stunts etc. to attract a major sector of audience. I was, however, very determined with the script and felt these additions could disrupt the flow of the story and its consistency. We therefore lost the opportunity of finding major producers.

It was my friend, Mr Gautam Kandarajan, who is a music director by profession and who had supported me very strongly from my previous projects, who insisted me to start the film independently. Gautam has a very good knowledge in world cinema and developing scripts. In discussion, it sounded easy but in reality the proposal sounded a challenge to execute.. We all were from middle class families and producing a film was a challenging task. Gautam brought up the idea of crowd funding. My parents and friends also extended their hands in supporting my venture. Gautam soon got involved into the film and came out as a major producer for the film.

The entire film was shot in just 15 days.. We could not afford a high end film camera such as Red, Arri Alexa etc. My cinematographer, Raghu Rajagopal, insisted me to prefer Sony Alpha 7 S2.This camera was very comfortable for shooting in low light conditions and shooting outdoors. We shot at many places in Chennai in candid.

Luckily, I was gifted with a very good team of dedicated and spirited youngsters, who wanted to give their best. They are very talented and professional. My actors and team was very supportive and were eager to finish the shoot as quickly as possible. We could not, however, carry the shoot at a stretch due to financial constraints. So we opted to carry the shoot one or two days in a month.
This took a long time for us in completing the shooting part. Though the actors found it a bit difficult to carry the continuity, they sacrificed other opportunities and stood to support me in completing my film.
I personally feel Robert Sargunam, the music director and V.M. Karthik Kumar, sound designer have done a splendid job in maintaining the tempo of the story. The sound effects are designed in a way that it may look very real and natural and will drag you to the character’s insight. The background score in addition brings a new dimension to this film and elevates the mood till the end.

We are all entering a new digital era with plenty of opportunities for many filmmakers to explore their talents.. There are many digital platforms such as Netflix, Amazon, Zee, View, Airtel, Jio Prime etc. who are on the look out for new contents. We also did this film believing the content, its novelty and pulse of the audience. We are sure this movie will attract a lot of viewers and set an example that a good script and a dedicated team can make a difference in making a very good film. We are hoping a lot of support from the media and audience. Your encouragement will boost the courage to us to try something new and productive.
Thanking God and each one of you in giving us this opportunity. 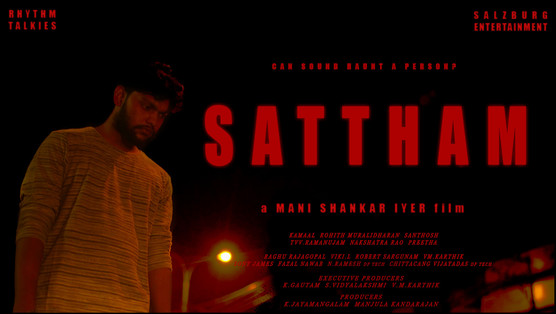