Pain Is The Agent Of Change

After months following his brothers death. Julian questions his upbringings on how to process pain in life. "What if being strong isn't an option?"

Tristien Marcellous Winfree is more than grateful to start his film festival circuit run. He's a local Chicago writer, director, actor, producer, teaching artist, and film maker. He attended The University of Houston-Downtown studying Fine Arts. Mr Winfree has had the privileged to perform and collaborate with theatre companies such as The Alley Theatre, Ensemble Theatre, Pride Film & Plays, Goodman Theatre, Congo Square Theatre, Oak Park Festival, Chicago Dramatist, LatinX Theatre Commons, and other companies. Film & Commercial credits include Pain Is The Agent Of Change Short Film, The Healing Begins Documentary, The Tie Bar, Big Break, Teen Prevention, Wind stream Kinetic Energy. Mr Winfree is a huge advocate for mental health awareness. He uses his platform to make change in the world one step at a time. He represented by Lily's Talent. Stay updated on his website www.TristienMWinfree.com and follow him on social media platforms @Tmarcellousw

"Grief arises as a product of a loss that we have experienced. It could stem from a person’s health, relationship, job, and loved ones. We may not be able to describe the wave of emotions, yet we do know that we are not ourselves. In the short film Pain Is The Agent Of Change. Tristien Marcellous Winfree tackles how we look at, unblock, wrestle with, and shed light on the distance and detach from our on own personal pain. The arts can heal us by giving these bits and pieces the attention they deserve and need. There is so much power in talking about it. We should be able to talk about mental health, we should be able to talk childhood trauma, and we should be able to talk about grief, but as a culture we shy away from the uncomfortable conversations. This an opportunity to learn from others who spoke, who fought to be heard, and the need be felt. Each time that we engage in the process using the arts, we give ourselves a break, a breath, and a reprieve from the pain that we face as culture." 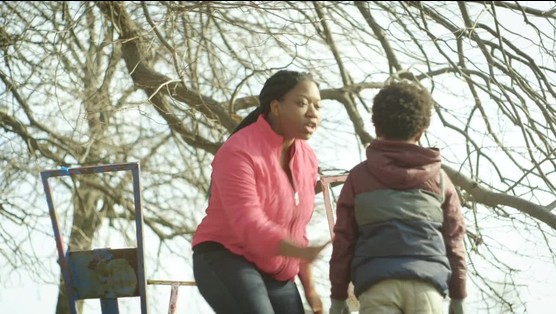