The Infectious Imagination Of Henry Bramble

When a stuffy retired Judge is forced to spend time with his ten-year-old Nephew, he learns the significance of losing his imagination, but it is never too late to get it back!

Writer and director Derek Boyes graduated from the National Film and Television School in 2004. His ambitious family fantasy graduation short, The Happiness Thief, was officially selected in competition at Cannes that same year and went on to play at film festivals across the world.

Since then, Derek has directed shorts for the BBC, UK Film Council, Bfi and Screen South while developing a slate of ambitious feature films. His first feature screenplay, Blackout, was a gritty neo-noir thriller optioned by Ipso Facto Films and developed by Moxie Makers as part of The Big Pitch scheme in 2008.

In 2011, Derek stepped back from the film industry to bring up his daughter. He continued to research and develop new film projects, but not being able to get ‘behind the camera’ became increasingly unbearable. To remedy this he began to explore more resourceful and innovative ways to shoot regular no-budget shorts and in 2017 he took on multiple roles to make the 2018 award-winning i-phone short Last Night.

Derek is currently developing the feature length version of his fantastic family-fantasy The Infectious Imagination of Henry Bramble and hopes to use the short's festival success to leverage development funding.

Six years after film school, my third and most promising opportunity to get a first feature film off the ground fell through and my only creative release at the time was teaching kids filmmaking at weekends.

Although the work they produced was limited, their imaginations were on fire and it helped me to reignite my own. I never imagined I'd be able to come up with another idea just as original and magical as The Happiness Thief (my NFTS graduation film), but it was during one of their summer classes that I happened to come up with the basic premise for Henry Bramble.

Having spent seven years in feature development, I had done very little directing in that time. When I came up with HB I knew straight away it was something special and that it had the potential to kick-start that elusive feature career, turning heads in the industry and reminding them I'm still here.

During the development of the script, my wife and I were expecting. We both wanted a girl and so it never occurred to me until the day before our mid-pregnancy scan that it might in fact be a boy. In a sudden panic I tried to imagine what it might be like to have a son and what formed in my head was the basis for Henry Bramble. As it turned out we had a beautiful little girl, so for me, the character of Henry is my homage to the son I never had.

I wanted to create an original, sweet, heartwarming film that would touch audiences of all ages and give them that unique rich cinematic experience. In addition, I wanted to show that it was possible to make original, ambitious, family-fantasy films with a modest budget, while still maintaining high production values.

Due to a tight budget, we were forced to squeeze the shoot into just three days, and by the skin of our teeth we did it. However, nothing could have prepared me for the level of disappointment and frustration I was about to experience over the next eight years.

The vfx lab who were assigned to complete the vfx for the film, as part of the funding deal, unexpectedly disbanded half way through post-production, leaving us unable to deliver a finished film. Over the next two years, two more vfx teams attempted to complete the outstanding work, but file corruption and software issues made it impossible.

Despite various attempts to raise money through crowdfunding and filmmaking benevolent schemes, it became clear we were never going to raise the kind of money that established vfx houses were asking to finish the work. We then approached vfx schools, but even their recent graduates did not have the level of skill required to pull off a convincing cgi creature. It seemed all hope was lost.

A couple of years later however, I was introduced to a vfx guru who managed to fix the corrupted files and salvage a folder full of transparent test renders of the cgi creature. With the help of a keen vfx graduate, I was able to break down the outstanding work in an attempt to finish the VFX myself using just After Effects.

Taking advantage of the Covid 19 lockdown, I tackled the outstanding VFX work shot-by-shot and to my surprise, my first pass turned out much better than I had expected. For the first time in eight long years, I realised this long-awaited film was actually going to get finished.

I'm genuinely thrilled to finally be able to screen this heartwarming fantasy short to festival audiences all around the world. 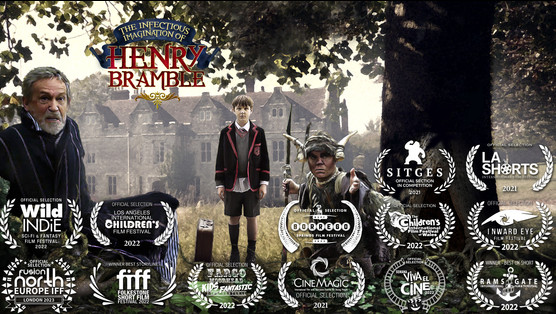