After losing his job and place to live in deteriorating economic environment, Spencer Thompson (Arek Zasowski), a depression suffering financial consultant from London, embarks on a journey to Cyprus with a plan to end his life. On the island, he meets a young girl Angela (Cynthia Dou), who introduces herself as "Chinese Angel". Life changing miracle happens in four normal days.

Sha Peng, Director, Producer, Writer and Actress, began her film directing career in Los Angeles CA, in 2016, when for the first time, she directed her first short drama “You Can Heal Your Life”.

The film was filmed at the Universal Studios Hollywood back lot and was produced at the New York Film Academy (NYFA), Los Angeles, where it was screened on the big screen during final NYFA screening ceremony.

At the film academy, Sha met an actor Arek Zasowski, whom she casted for a Co-Star role, Ben, a song recording manager who was trying to overcome his weaknesses from his troubled past, in her first production "You Can Heal Your Life".

Around seven months later, in March 2017, Sha met Arek Zasowski again, this time on a sunny island of Cyprus, to film her second drama “Chinese Angel” which has just been completed.

Sha is an experienced stage art director. She has directed many stage shows during the past 10 years.

I am proud to present our heart-warming drama "Chinese Angel".

In light of the current COVID-19 world health crisis the film gains even more meaning as it offers some relief and hope that there is always a light at the end of the tunnel even if we may not see it yet.

It is a story about difficulties and suffering that we may endure on some point in our day-to-day life and unexpected relief. A story that depicts suffering from depression financial professional, who in deteriorating economic environment, lost his job and place to live and also his will to live. He travels to Cyprus and meets young girl who may change his perspective.

It was filmed across three continents and three countries: Cyprus, England and Canada. 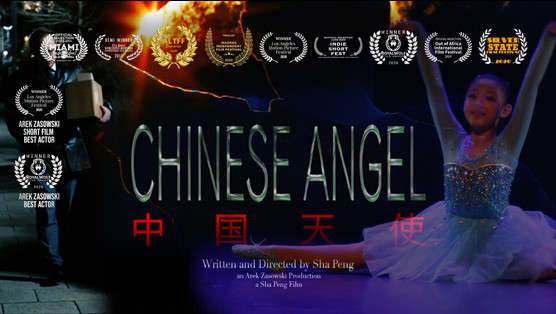