A girl can't get out of her garage. To do so, she will need to survive the pitfalls coming from her Borderline Personality Disorder.
The film stages the symptoms of the aforementioned disturb, relying on the experience of the leading actress, who suffers from it. The purpose is to raise awareness on the subject.

Martin Basile (born March 21 1992) is an award winning Italian film director, screenwriter, songwriter. His films mainly focus on themes related to ontology and the concept of reality, using the medium as a metaphor for experiencing life.

His latest works are:

As a songwriter Martin Basile wrote and produced many albums ("All You Can Eat", "Solitunes", "Kalokagathia"...) He also won several Italian prizes, such as the Emanuela Pedulà Prize in 2016, the Toscana Selection Prize in 2015 and the Sotto Toni Prize in 2014.

When I write a story, I always start from characters: the best way I learn to get to know them is by understanding their neurosis and psychosis. This film was specifically done for a 6-days short film competition in Italy. I only knew I had Vera as the lead actress, my garage as the only location and a few friends to help me out. When I talked to Vera about my vision I was wondering about the protagonists' psychology. This is when she confessed me that she suffers from BPD.

A person who suffers from Borderline Personality Disorder is emotionally unstable in a way that many people find hard to understand. This is why I thought that making a film about it could be useful. I've been reading about BPD for a long time but I never fully grasped its true nature; it was when I worked on this film with Vera that I finally got it. She helped me understand how the character would react to specific situations, and she made it clear by telling me about her life. This is why I decided to stage this condition allegorically. Words and logic are often overrated in films.

The Structure of the film follows some of the main symptomps of BPD, such as a fragmented sense of self, a feeling of emptiness, the fear of abandonment and self-hatred. The film doesn't provide the protagonist with the solution to the problem, because there's no easy way out of BPD, although it is possible to work on it with dialectical behavioral therapy. 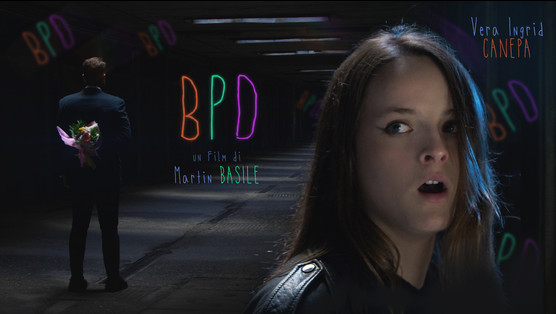