11yr old child-bride Halima and 13yr old attention seeking Grace are rushed to a local hospital in Lagos in critical condition during a general hospital strike. Through a series of flashbacks their dreams and aspirations unfold. When events take a turn for the worse kindly Dr. Peterson goes beyond the call of duty and risks her own personal safety to help the girls to resolve their problems and regain their hopes for a better future.

Unspoken is a cautionary tale about the risks young girls face when exposed to sexual encounters at an early age.

REMI VAUGHAN-RICHARDS is vibrant and versatile director. She studied MA Textile Design at the Royal College of Art, London where she was awarded a distinction for her innovative designs and a Post Graduate Diploma in Film and Television at Kingston University, London.
She recently received an award at the Africa Magic Viewers Choice Awards for her documentary 'Faaji Agba' , which premiered in London at the British Film Institute "Beyond Nollywood" 2016 festival. She received an award for her contribution to documentary films in Nigeria. The award winning docu-drama 'One Small Step' (featured in the New York African Film Festival) and 'Scent of the Streets', documentary on Area Girls for BBC featured at Afrikamera, Berlin. As well as the groundbreaking 52 part TV drama 'Wetin Dey' for BBC World Service Trust, Nigeria, Remi created an interactive multi-media project for the launch of the £22m Rich Mix cultural centre, London, which involved film, interactive computers and community participation. Her feature films include: 'The Department', (drama), Inkblot Films; and most recently the documentary feature, Faaji Agba, as well as her latest drama feature, 'Unspoken' for Ford Foundation.

Her career began in 1990 in the Art Department working on films such as ‘Judge Dredd’ (Sylvester Stallone), and Stanley Kubrick’s ‘Eyes Wide Shut’ (Tom Cruise and Nicole Kidman). In 1995 she became a respected storyboard artist, visualizing the action, camera and mood for her clients such as the BBC and 51st State (Samuel L Jackson).

Since 2000 her skills and experience have added an extra dimension to her work as a director. Remi’s mission is to create a slate of cutting edge feature films and documentaries that will focus a sharp lens onto contemporary Africa.

"Unspoken" is a film I feel privileged to have been able to make. I wanted to make a film that would entertain and in my own small way, contribute to preventing young girls from following the paths of my characters. The issue of child brides for young girls as young as 11 is prevalent in the North of Nigeria, in the South, girls get pregnant and seek help in the wrong places to get an abortion. Since abortions are illegal in Nigeria, women and girls end up in the wrong hands

Once the film was made it went on tour around 18 states in Nigeria covering all the major geo-political zones. It was screened at community centres and at schools. It was at the schools the I got the best and most honest feedback.

I love the challenge of making a film which can impart a message without making the viewer feel they are being preached at...entertainment that the viewer will walk away from and think on.

I thank the Ford Foundation for supporting the project and allowing me to spread the message across the length and breadth of Nigeria and maybe beyond...who knows 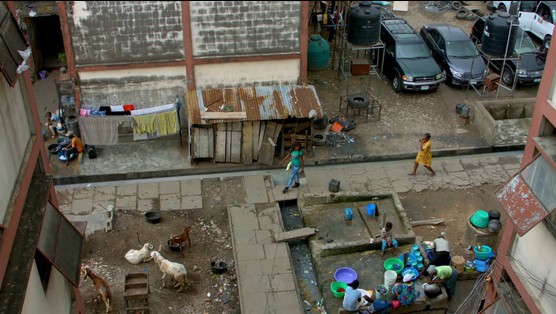