The Living God: Medicine and The Ancient Meetei Civilization

Meetei Civilization flourishes in the ancient land of Kangleipak, which now belongs to the north-eastern region of India bordering Burma. It is a civilization still unknown to the world.
Its ancient script epitomizes the advanced nature of its civilization. The form, structure and phonology reveal the understanding of structure of human physiology. Its ancient writing, Puya, records their ancient knowledge on a widely varying subject like astrology, astronomy, genetics, medicine, human physiology, predictions, origin of life and the universe, and secrets of life and death. But most importantly, it writes about the mingling and relation between Lai (God) and Human.

Even today, the mingling between the two can be witnessed during Lai Haraoba (Festivity of God)

Withstanding the burning of Puya in 17th century, many mentions of this ancient writing still continue to exist in this land. The medicine of this ancient civilization is one such inheritance from the Lai (read ancestor God). The descendent still continues to treat various modern diseases with the healing power of this medicine.

Born in Imphal, Manipur, India, Prakas Aheibam has been very fond of antiques, artifact and folktales since childhood. It made him fantasize about the world it belonged to. Like many of his age, he grew up hearing about the golden era of Meetei culture, in what was now a morally degrading society. Like many, he had a secret longing for the then unknown world of Meetei civilization.

In 2006, he witnessed a miraculous healing effect of the ancient Meetei medicine when his father was ailing. This intensified his curiosity to learn about ancient Meetei culture and society. But, what propelled his quest was his encounter with a friend, who introduced him to the illustrated human physiology that formed the structure and phonology of ancient Meetei script, which is revived today and is in use. Now, for almost a decade, Prakas Aheibam has been dedicated to researching different aspects of the ancient Meetei civilization.

Professionally, Prakas is a Founder and Designer of Colour & Space, a design studio in Imphal, Manipur. But for the last half decade, he has almost sacrificed his profession to dedicate his time and energy to the research of ancient Meetei civilization.

Since the last few years i dedicated my time
into research on the ancient Meetei civilization and Medicinal
curing and healing system of the civilization and many break through discovery has been made . and miraculous medicines are discovered which heals and cure many
diseases of our human society .
Discovery of medicine for diseased conditions of heart - cancer Medicine - diabetes Medicine - vocal cord Medicine (a good news to singer ) being some of the important discovery.. And a clues to genetic disorder and prevention or cure .

Writing system is regarded as greatest technology of our world civilization without which all the idea, invention , knowledge and important facts got loss in time where oral tradition and pictorial communication fills the absence of written technology which eventually fail to keep detail record which is the case of all the known civilization of the world which itself is the true fact and cause of the mystery world civilization. This is true for ancient as well as our modern advancement today, without writing all the advance development and technology is of impossible.Ancient Meetei ciivilization is known to illustrate the form of human physiology, The script of Meetei Civilization is interpretation of human physiology.Its ancient writing Puya have informationon a widely varying subject like astrology, astronomy, genetics, medicine, human physiology, predictions, origin of life and the universe, and secrets of life and death . But most importantly , its writing about the mingling and relation between Lai (God) and Human society.

The Mystery of Meetei civilization is is not about mystery of unknown but about an existence beyond our existence as Human Kind that point to the origin and making of Human body and integration of our soul that is all written and communicated in Puya , where the script is not of human making or concept but of Lai or God of the civilization .

A natural form of number system exist ( in ancient Meetei civilization ) , showing and representing the human foetus from 1st month of pregnancy to 10th month or the delivery time ie, equivalent to 1 to 10 , which also shows the origin of PHUN/PHOON OR ZERO equivalent and the process and development of foetus or child/human.
The origin of number system is explained , detailed and communicated in Puya , the ancient writing of the civilization .
According to Puya , number system is neither invented
nor evolve . They are the language of Lai or God -
an infinite - a timeless or limitless in our human world , but only communicated through human kind.
How can we make an invention or a system without knowing and sensing or seeing the start and the ending ,where the natural number system is so complete in its own sense.
when we say limitless or infinite ,we are only knowing that there is no limit to human ,that is nature ,the limitless to the human senses.

" The Code of our Existence " 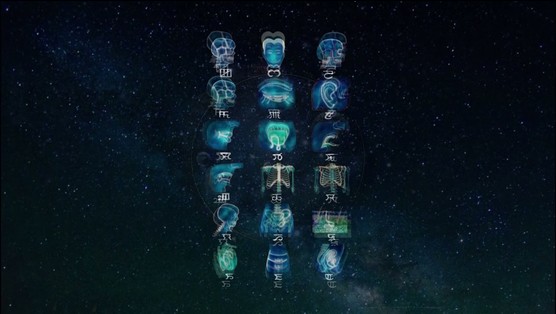