Based in a real story. Some friends celebrate that they got a housing subsidy and also, one of them gets a job, they go to the kitchen to prepare Churros thanks to a recipe that came as a gift in the newspaper, they are preparing it without taking into account the error that it causes that burns badly. one of them, showing how fragile they are

Fabrizzio Bartolini was born on December 25, 1985, since he was a little boy, little by little he came to the world of Animation through his skill in drawing, at school creating stories of his teachers and classmates with small comics, with eleven years old he took classes with the Chilean cartoonist Avelino García, comic book artist for important magazines including Condorito, Bandido, El Peneca, Zorro, where Walt Disney Productions prohibited artists from signing comics, drawing in Themo Lobos Animation, and the Mexican Penjamón.
With Avelino he had the first knowledge about character structure and how to build a caricature, with which he began to draw classics of the Animation of those years 1995 1996 in Chile, The Knights of the Zodiac, Dragon Ball, creating his own versions of characters, at 19 he studied Digital Animation at the University of the Americas, integrating the first generation of digital animators licensed in Chile, obtaining awards at festivals, thanks to his short films.
In 2007 I work in the post production of the animated series Patagonia in the production company Cubo Negro with the Director Erwin Gómez, where he learns how to assemble and create audiovisual pieces of animation, and gets an honorable mention in SHORT and PRECISE festival of Santiago with BOOMER his first short film, real story of his first dog which was sacrificed,
He works in the post production of the theatrical work Sin Sangre of the Teatro Cinema company with the direction of Juan Carlos Zagal work that combines theater with film. In September 2007 he travels with the Universidad de las Américas to the Animado Internacional Animaino Anima Cordova 07 festival, where he interacts with important Directors and manages to make his short film, Boomer reach countries like Uruguay in the International Animation Festival Fia 07 in Montevideo.
In 2008 He teaches classes of the Toon Boom, Adobe Premiere and Adobe Affter Effects softwares in the graphic production I productions and animates in the 3D series for children "It's my Turn".
In 2009he is titled with honors as Digital Animator, in October of the same year, thanks to his second short film LA PERIFERIA, a short film that reflects the experiences of middle class people in Chile with anecdotes from him and his neighbors, in April he obtains the first place in the film festival Cine de las Ideas, also in October he obtains the Second place for the best national animation in the short film festival of Santiago FESANCOR.
In March of that year he began to work in Flipos and the pilot of Futboleras in the Punk Robot producer director Gabriel Osorio, is a professor of illustration at the University of the Americas. In 2010 he worked on the first 3D lens film, Trip to the Big Bang of 3D films. In October 2011 he is called by Gitano Films who tell him that together with the southern window of Argentina they would take LA PERIFERIA to Cannes for the original way of telling the story, in 2011, 2012, he works on different projects doing Animation and Rigging in the production company Spondylus among them the Pilot of the film The Mask of the Moon by director Erwin Gómez, the short film The Hunt of the director Margarita Cid and the series Pachapulai director Erwin Gómez.
In 2012 Gitano Films communicates with Fabrizzio and informs him that La Periferia will be screened at the Cannes Film Festival and other class A festivals such as the Guadalajara Film Festival. In 2013 he finished animating the short film La Cacería de Margarita Cid. In 2015 he is called to animate in the film Homeless in the producers Fabula and Lunes, the first animated film in black humor in Chile, until April 2016, where the 2D Animation team of Punk Robot is integrated, ending the chapters of the series Zeta and Ozz Director Leonardo Beltran and producer Patricio Escala, until early 2017, then having more than 10 years in the world of animation decides to undertake their own projects to try to live their creations. 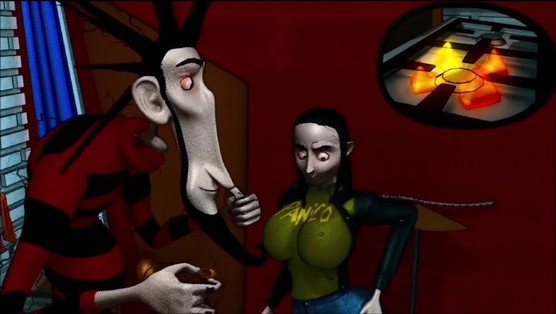